Wycombe District Council has rejected a planning application from Bramley Homes which threatened Booker Common and a public bridleway. 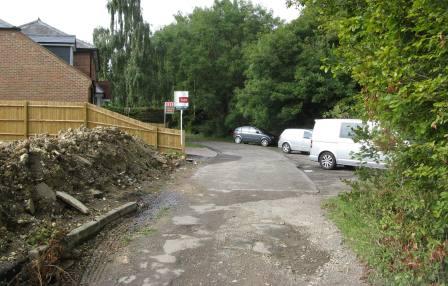 The development site is on the left. The converted pub is further along on the left, with its hardstanding possibly encroaching on the bridleway. Booker Common is to the right.

The application was for two houses on land next to the former Live and Let Live pub at Booker Common, High Wycombe, Bucks. The society was concerned that the development would have an adverse effect on the adjoining common and public bridleway.

The developers did not even acknowledge that the houses would be right next to the common and a public path enjoyed by walkers, riders and cyclists. They would have been inconvenienced and endangered by the construction vehicles.

This land is in the Chilterns Area of Outstanding Natural Beauty and popular for quiet recreation. The development would have conflicted with that enjoyment and put the common and the bridleway at risk. It is a relief that the proposals have been thrown out.