Criminalising bottles on the beach at Whitstable, Kent2 min read

We have criticised a draft public spaces protection order [1] for Whitstable [2] in Kent which will make criminals of many of its residents and visitors. 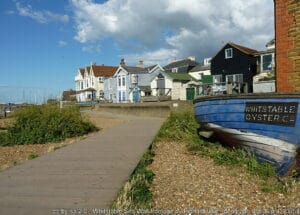 Whitstable sea wall frontage: it would be an offence here to drink from a glass bottle of fruit juice. © Copyright Richard Law and licensed for reuse under this Creative Commons Licence.

Canterbury City Council has consulted on a draft order which would apply to the ‘Whitstable and Herne Bay Coastal Zone’. It would create new criminal offences to address activities having a detrimental effect on the quality of life of those in the locality. Included are provisions to prohibit using disposable barbecues, and recreational camping.

But in our response to the consultation, we have identified multiple flaws which risk making criminals of residents, business owners, and visitors. The draft, if implemented, would apply to much of Whitstable town centre, even though described as applying only to the sea front. It would make it an offence to:
• ride on a bus into Whitstable town centre;
• drive along Harbour Street or other roads near the sea front;
• take a glass baby bottle or bottle of fruit juice onto the beach;
• enter any area designated a wildlife protection zone, without any rules about how such an area is designated;
• keep a baby shade erected on the beach for more than 12 hours;
• swat a fly.

The draft order would also enable an authorised council officer to confiscate alcohol from a customer dining at a table in the street outside a café if he or she had a reasonable belief that confiscation were ‘necessary in order to prevent or reduce public nuisance or disorder’.

Says our case officer Hugh Craddock: ‘We understand that the council wants to take steps to control anti-social behaviour in the coastal area. Many will welcome the initiative. But in creating new crimes, it should take great care to get it right, and avoid criminalising ordinary, legitimate activities.’

Hugh adds: ‘The draft is so riddled with elementary errors that it should be withdrawn and reviewed before further consultation. We want the council to specify to exactly what land the order would apply, and to think very carefully about the scope of the new offences. And the council should avoid criminalising simple trespass onto wildlife sites unless there is convincing evidence of a need to do so, and that other lesser measures have failed.’