We have welcomed the decision of the supreme court not to grant leave to appeal against a decision that Blackbushe aerodrome should remain registered as common land. 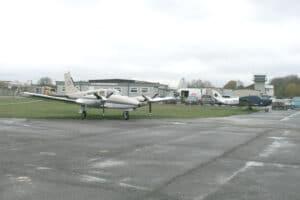 Blackbushe aerodrome: the aerodrome is claimed to be curtilage of the control tower, visible back right.

The aerodrome lies on Yateley Common in Hampshire. It was established as a temporary wartime measure.[1] It is now operated by Blackbushe Airport Limited (BAL). Yateley Common, including the land occupied by the aerodrome, correctly was registered as common land under the Commons Registration Act 1965.

In November 2016, BAL applied to Hampshire County Council to deregister the aerodrome on the grounds that it was ‘curtilage’ of the terminal building.[2] The council properly referred the application to the Secretary of State for Environment, Food and Rural Affairs for determination, and an inspector ruled in favour of BAL, contrary to the objections of the society, commoners, and local people, and the representations of the council.

Hugh Craddock, a case officer for the society, says: ‘We are delighted that the supreme court has declined to interfere with the decisions of the courts below, and that any future determination of BAL’s application must confine itself to the deregistration of land intimately associated with the terminal building. The aerodrome therefore will remain as registered common land.’
‘We are very grateful to the council for taking the lead in challenging the inspector’s decision, and to the council’s and the society’s legal teams for successfully putting the case in defence of Yateley Common.’[4]

Hugh continued: ‘However, this is not the end of the story. Blackbushe aerodrome continues to occupy a large part of Yateley Common to the exclusion of the public and of the commoners who have rights exercisable over the land. BAL also interferes with free public access along Welsh drive, a public bridleway across the common. We shall not be satisfied until the aerodrome becomes accessible common land once more, and Yateley Common finally is freed of the legacy of wartime requisitioning.’

[1] The airfield is part of Yateley Common and was requisitioned as an RAF base during the Second World War. Although it was de-requisitioned in 1960, and the terminal building was sold off for demolition (the contractual obligation to demolish being flouted), the common continued in use as a private airfield—despite being correctly registered as common land under the Commons Registration Act 1965 following a decision of the High Court in 1976 (Re Yateley Common, Hampshire, [1977] 1 All ER 505).

[2] The application was made under paragraph 6 of Schedule 2 to the Commons Act 2006, which enables an application to deregister common land where, among other requirements, ‘since the date of the provisional registration [16 May 1967] the land has at all times been, and still is, covered by a building or within the curtilage of a building’. The effect of the application, if granted, would be to deregister 46.5 hectares of registered common land.

[3] The application is expected to be remitted back to the Secretary of State for a new determination, but any inspector will be constrained by the clear position of the courts that the aerodrome cannot be curtilage of its terminal building.