The Open Spaces Society and members of Helredale Neighbourhood Council (HNC) in Whitby, North Yorkshire, are delighted that the application to register Helredale playing fields as a village green will be heard in the Supreme Court. The news came last month that the applicants had won leave to appeal. 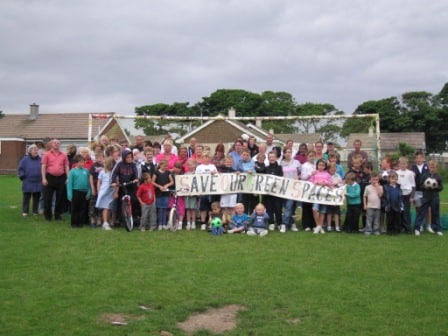 The campaign to save Helredale’s field

The application for a green was rejected by the Court of Appeal last October, having previously been rejected by the registration authority, North Yorkshire County Council, following a public inquiry at which Mr Vivian Chapman QC was the inspector.

A member of the HNC committee, Mrs Christine Barkas, had applied to register the four-acre site on the grounds that it had been used for informal recreation by local people ‘as of right’, ie without being challenged and without permission — essential criteria for registering land as a green. If it is registered the land will be protected from development: there are plans to build houses here.

The Court of Appeal ruled that because the land was acquired under the Housing Act 1936 it was not eligible for registration.

Says Viv Wright, secretary of HNC: ‘When we started this application over six years ago, we never dreamed that we would end up before the Supreme Court. The outcome is likely to have a significant impact on village green applications in future. It raises an important area of law and we understand that there are a number of instances where inspectors are reserving their recommendations pending the result of our case, and a number of judicial reviews which have been stayed.’

Susan Ring, of Richard Buxton Environmental and Public Law Solicitors in Cambridge, has been acting for Mrs Barkas, together with barristers Cain Ormondroyd and Douglas Edwards QC, the latter having appeared in the Court of Appeal.

Comments Nicola Hodgson, case officer for the Open Spaces Society: ‘This is an important case which will determine whether open spaces which are held by local authorities under the Housing Acts can be registered as greens. There are many such examples and we hope that the Helredale case succeeds in the Supreme Court and makes further registrations possible.’