We have won a new town green and public footpath for the people of Witney in west Oxfordshire.  These public amenities are on land at Coral Springs, between Thorney Leys and the A40, which four years ago was developed by Richmond Care Villages (RCV). 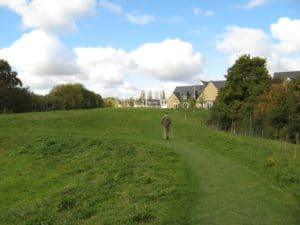 Looking north-west over the new green towards the RCV estate

In building an estate of retirement homes RCV illegally blocked a public footpath by constructing one of its new houses across it.  Belatedly RCV applied to move the path, but the Open Spaces Society objected, because it was an important route between Witney and open countryside to the south, and the proposed diversion was longer and less pleasant.

The objection would have halted the development by some months, costing the builders time and money.  The society used this as a lever to persuade RCV to dedicate a new path through the estate, and a new town green.  In return, the society withdrew its objection to the path diversion.  Witney people now have the right to enjoy the 2.5-acre green for what the law terms ‘lawful sports and pastimes’, namely informal recreation such as walking, jogging, dog-walking, casual ball games, and other activities.  The green consists of undulating grassland and lies beside the Colwell Brook.

Status as town green protects the land permanently against development.

Although the society’s agreement with RCV was reached in November 2016, Oxfordshire County Council has only recently completed the registration of the new green which means that it is now formally open for use not only by the residents of RCV’s estate but all Witney people.  Also open now is the new path which runs north-south across the site and forms a pedestrian route between Thorney Leys a suburb of south Witney and the countryside south of the A40.