The Country Land and Business Association (CLA), the National Farmers’ Union (NFU), the Tenant Farmers’ Assocation and the Countryside Alliance have asked Defra Ministers to legislate to facilitate farmer-managed diversions on public paths to avoid cattle and other livestock. 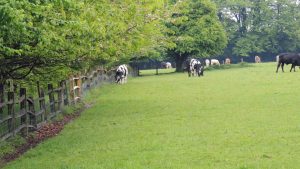 The Ramblers’ website offers a good summary of the position.

The society has attended meetings with the CLA and NFU, and other (but by no means all) stakeholders, in February and July 2020, to discuss emerging proposals.

The February meeting was presented with a proposition which we considered to be exceptionally partial.  Although allegedly founded in a concern to eliminate risk to path users, it would have enabled land managers to promote diversions away from any land containing livestock including sheep.  There were strong objections to all of this.  But few concessions have since been made other than to excise any reference to sheep.

We have said all along that the requirement for statutory measures is unproven, and commended the voluntary code which has been adopted in south west England, involving optional diversions for those who wish to avoid the possibility of conflict with livestock.  We have also criticised as unacceptable the form of a proposition which enables land managers to decide whether, when and where to divert a public path.

We have written, with other user organisations, to Defra ministers, to express our opposition to the proposition, to stress the need for a sequential approach to reducing risk (such as rearranging grazing activity, fencing off part of the field, relocating feed and water troughs), and to emphasise the need, if ministers wish to take further action, for wider consultation to establish whether there is a problem which requires legislative solutions.