A footpath in the parishes of Honing and East Ruston in north Norfolk has been reopened, thanks to the persistence of our local correspondent Ian Witham. 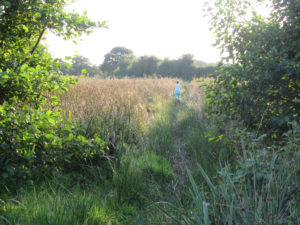 In 2012 Ian reported to the highway authority, Norfolk County Council, that part of footpath 15 in Honing and 27 in East Ruston was under water from the construction of a fishing lake and obstructed by fencing.  The 700-yard footpath runs across part of Honing Common and an area of wetland.

The council took no action and so Ian, with support from the society’s head office, served a legal notice on the council under section 56 of the Highways Act 1980, requiring it to maintain the path.  After a number of visits to the court, the council agreed to a partial diversion of the route to overcome the incursion by the fishing lake and the lack of a bridge over the Hundred Stream, enabling people to use an old railway bridge.

Now, at last, thanks to Ian’s efforts, the route is reopened after more than 20 years of disuse.  However, Ian is still pressing the council to ensure that it is well waymarked and that people are encouraged to use it.  Such use would help to keep it trodden clear of overgrown vegetation.

Says Ian: ‘I am pleased that this old public path has been opened up, at long last.

‘While our aim was always to seek the opening up of the old, historic route, the new, partially-diverted route offers close views of the old East Ruston Branch of the North Walsham & Dilham Canal (now an anglers’ lake); it runs alongside part of the Hundred Stream, and cuts across a beautiful, and otherwise inaccessible, part of Honing Common.  This makes an altogether more attractive and much more interesting alternative (for its history, flora and fauna) to the dismantled railway line that the county council has been—and still is—both maintaining, and encouraging the public to use instead.

‘The council’s duty to maintain the path does not end here, but is ongoing.  We shall be monitoring the state of the path closely, in particular its surface condition, and the amount of water, vegetation growth and footfall.  The path needs to be kept usable at all times of the year, not just the dry summer months.

‘I call upon the Norfolk Trails arm of the county council now to update its promoted Honing Lock Circular Walk to incorporate the newly opened up path (Honing FP 15/East Ruston FP 27), instead of just simply duplicating the route of the long-distance Weavers’ Way in following the old Midland and Great Northern Joint (M&GNJ) railway track-bed.  This would offer a much more interesting, varied and locally meaningful component in the promoted network.

‘I also call upon the county council to address the problem of persistent car parking across the newly opened part of the path East Ruston FP 27.’