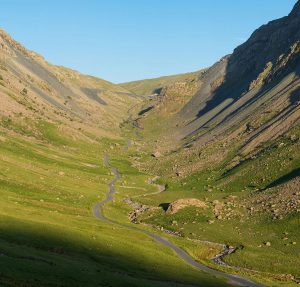 The society is backing the Friends of the Lake District, Cumbria Wildlife Trust and other organisations and individuals in opposing the scheme.

We have objected to an application from Honister Slate Mine for an aerial zip-wire over the Honister Pass in the Lake District National Park. The application is similar to one which the national park authority refused in 2012.

The society considers that the zip-wire would be highly visible from the adjoining fells and would create an eyesore. This commercial recreational facility would be contrary to national park purposes. It would create an irreconcilable conflict with the protection of the natural beauty of the park, thereby transgressing the Sandford Principle, which requires that, where conservation and recreation are in conflict, the park authority must give priority to conservation.

Since the park authority considered a similar application six years ago, the Lake District has been designated as a World Heritage Site, so the arguments for refusing the application are even stronger than before.

We believe that this application would be highly damaging to this wild, grand landscape and to people’s quiet enjoyment here, and it would set a damaging precedent. We have urged the park authority to reject it.