We are delighted to have helped to save 800 metres of footpath in the lovely Todd valley, between Kettleshulme and Rainow in Cheshire East, from being expunged from the official (definitive) path map. 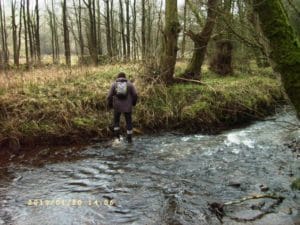 Mrs Marie Cunningham applied on behalf of the landowner to Cheshire East Council to have the path removed from the official map.  This was on the grounds that it was wrongly recorded on the definitive map in the 1950s.

The Open Spaces Society and the Cheshire East Ramblers objected, arguing that there was no evidence that the path was wrongly shown on the map. The council agreed and refused to make an official order deleting the path.  The applicant then appealed to the Planning Inspectorate which, on behalf of the environment secretary, refused the appeal.

Now that the route’s status as a highway has been upheld, the Open Spaces Society will press the council to remove the obstacles and replace the missing footbridge.

Says the society’s local correspondent, Chris Meewezen: ‘We are delighted that this long-running saga is now drawing to a close, and we look forward to the council returning this route to public use, by removing the obstructions and replacing the footbridge.

‘This attractive path forms an integral part of the path network, in a popular walking area famed for its large herds of red deer.’