Stop press:  Unfortunately, at its meeting on 5 June, the council agreed to pursue the roadside route and the car park on Bridge Gardens. We shall fight this.

We have called on Windsor and Maidenhead Borough Councillors to vote today for a riverside route to fill the long-standing missing link in the Thames Path National Trail in Maidenhead.

Members of the Rights of Way and Highway Licensing Panel are being recommended to reverse their unanimous decision on 4 March 2014 to pursue the creation of a path beside the river. They will discuss the issue at their meeting this evening (5 June). 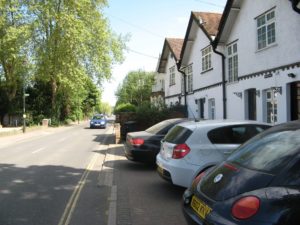 Now the cabinet is recommending to the panel that they extend the pavement beside the busy A4094 Ray Mead Road and take part of Bridge Gardens public open space to make a private car-park for residents who currently park in Ray Mead Road.

For 64 years the goal has been a continuous riverside promenade, all the way from Boulders Lock to Maidenhead Bridge. This is marred by the requirement for people to leave the river at Bridge View and battle with traffic along the A4094.

Says Kate Ashbrook, our general secretary: ‘We are dismayed that councillors are being pressed to reverse a previous, unanimous decision. The Thames Path National Trail is of national and international importance, bringing visitors into the heart of Maidenhead—indeed, for three quarters of them the River Thames is the main reason for their visit.

‘The route is severely marred by the dangerous gap, which forces people to jostle with traffic along the busy A4094. They are not only at risk of accident, but they cannot even see the river. This missing link is off-putting to walkers and visitors and highly inconvenient for local people too. 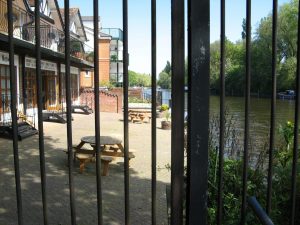 Where the path should go

‘The proposal to extend the pavement instead of creating a riverside route is outrageous. People will still have to suffer from the proximity of traffic and lack of river view. Also outrageous is the proposal to sacrifice part of the Bridge Gardens public open space for a private car-park to appease the residents of Bridge View. This is an abuse of a public open space and we shall fight it.

‘The council should continue with its agreed plan of a creation order for the riverside route, which will cause minimum inconvenience to the occupiers of Bridge View. The riverside route is highly popular with national and local organisations and individuals; there is clearly a need for the path so the legal tests are satisfied.

‘We cannot understand why the council is threatening to adopt this wimpish attitude to resolving this long-standing problem. There is a clear and popular solution. We say it must get on with creating the riverside route for the benefit of all,’ declares Kate.