We have objected to a planning application for a campsite and buildings at Coldwaltham, West Sussex, in the South Downs National Park.  The application was made by Mr Hugh Sandie of Pegs and Pitches Camping.

Our particular concern is the threat to the adjoining Colebrook Lane.  We have criticised West Sussex County Council for its confused and incorrect response to the application.  The council, which is the authority responsible for public highways, has said that the lane, which is a public road, is a ‘permissive path’, and it makes many other errors.  In particular, it fails to acknowledge the impact of the development on the road itself, that any person is entitled to use it and that, although not maintained as such, it is very probably a vehicular highway. 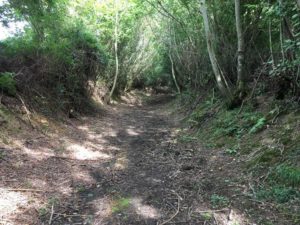 We have called on the county council to correct its advice.

We have objected to the application because of the impact it would have on people’s recreational enjoyment of the area and its natural beauty.  The society considers it would be contrary to the purposes of the South Downs National Park if the National Park Authority were to grant the application.

Says Hugh Craddock, one of our case officers: ‘We are strongly opposed to this development in a quiet and beautiful part of the national park and its impact on the important, ancient Colebrook Lane.  Most roads in the South Downs weald were like this once—unmade, hedged lanes deeply incised into the landscape.  We are deeply concerned that the highway authority, West Sussex County Council, which is charged to protect the public’s rights to use and enjoy the highways should have got in such a muddle.  We trust it will put things right.’