Some of David Bounds’ family and friends met on 30 April to unveil a bench in his honour on the hilltop footpath between Aston and Remenham.  David, who died in October 2019, aged 87, was the author of the Rambling for Pleasure series of walking guides. 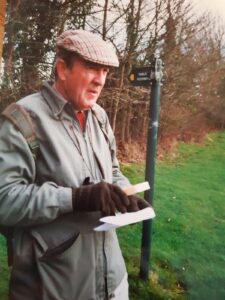 David, who lived in Twyford, spent much of his later life devising walks, clearing routes and defending the path network from landowner obstruction and abuse.  He was footpath secretary of the Ramblers’ Loddon Valley Group, among other roles, and was a member of the Open Spaces Society.

The bench has an unusual plaque design that illustrates David’s role in producing the guides, and his work for the Ramblers.

Our general secretary, Kate Ashbrook, said: ‘David devoted his life to giving pleasure to walkers, by producing books with clear instructions and lively writing.  These gave people the confidence and interest to explore paths and find new places to walk.

‘David worked tirelessly to ensure that paths were clear, usable, and well signposted and waymarked.  It is thanks to the strenuous efforts of volunteers like David that we can all enjoy our wonderful network of paths.’

Says Dave Ramm, co-producer of the Rambling for Pleasure series and other books, and David’s close friend: ‘David’s enduring talent was as a wordsmith.  His clear directions were constantly praised by those we met on the paths.  Who could resist those lovely tempting introductions that he was able to provide at the start of every ramble?

‘We shall remember David not only through his books but also whenever we pass his bench, which is sited on Ramble 20 of Rambling for Pleasure Along the Thames [1].  It is the perfect spot to sit, admire the view, and think of David.’ 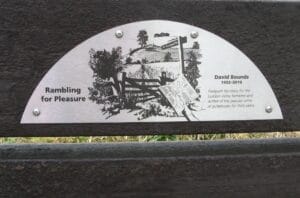 Detail of the plaque for the bench