We are delighted that a planning inspector has rejected an application from the Caron Estate for a 1,589-metre fence across Rhos Gelli Gron common, near Tregaron in Ceredigion. 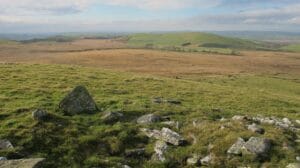 The estate applied for the fencing under section 38 of the Commons Act 2006.  The application is determined by the Planning Inspectorate on behalf of the environment minister.  The Open Spaces Society, Cambrian Mountains Society, Ramblers, Strata Florida Community Council, and several graziers were among those who opposed it.

The fence would have divided the common in two, cutting across a bridleway, marring the landscape and restricting people’s opportunities to enjoy it.  The public has the right to walk over the whole common, as well as to walk, ride or cycle on the public bridleways which cross it.  The fence, topped with barbed wire, would have only three crossing-points, one on each side of the common where it crossed a bridleway, and one in the middle.  The common is an important historic landscape.

The inspector, Vicki Hirst, undertook a site visit and rejected the application on a number of counts.

The fence would impede the movement of livestock, and inconvenience the graziers.  The applicant argued that the fence was needed to prevent over-grazing, but the inspector found no evidence that there was over-grazing.

The common is open-access land, crossed by a number of public rights of way including the long-distance Cambrian Way.  The inspector described the common as ‘a large tract of extremely attractive upland moorland characterised by its vast open space, largely devoid of woodland or improved pasture’.

She observed that the common ‘is inevitably an important amenity to local residents for recreational pursuits’.  She agreed with the objectors that the fencing would fragment the common and impede public access.

Having considered the effect of the fence on the open landscape and the historic setting of the abandoned farmsteads, she concluded that: ‘The fencing would considerably alter the open characterisation of this upland moorland.  It would be a wholly alien feature across the whole common, and completely at odds with the historical references to earlier habitation in the landscape with their associated historic boundaries.’  The fence ‘would be a dominating and visually discordant feature.  It would be highly visible from much of the surrounding common.  I conclude that the fencing would have a harmful impact on the landscape.’

Says Kate Ashbrook, our general secretary: ‘We are overjoyed that the fencing has been so comprehensively refused, and that the inspector appreciated the importance of this common for its landscape and history, and for public enjoyment.

‘We are highly relieved that this splendid stretch of historic landscape will remain open and free and we are pleased to have played a part in saving it.’