Our local correspondent Chris Hall writes of the society’s efforts to record a route across the River Thame in Oxfordshire as a public footpath.

Three miles east of industrial Cowley, deep and peacefully remote in the meadows of the Oxford green belt, is a legal battleground at grid reference SP 601 005. As recently as 2006 the spot was labelled by the words ‘stepping stones’ on the 1:2500 Ordnance Survey (OS) maps because here people used to cross the little River Thame. The stepping stones first appeared on this 1:2500 1898 OS map. The tiny eyot has now vanished. The footpaths (pecked double lines) converge at the crossing and are now definitive rights of way.

In 2002 society member Hugh Crawley claimed a right of way across the river for the definitive map. Ten years later Oxfordshire County Council (OCC) rejected his claim. Hugh, a determined warrior (he landed in Normandy on D-Day + four), appealed and the planning inspector (Peter Millman) found for him—and directed OCC to make the order. Two landowners, Sir Victor Blank, a banker at nearby Chippinghurst Manor, on the western bank, and an absentee farmer on the other side objected to the order. OCC opted for neutrality and it was agreed to deal with the objections by written representations. The late Yvonne Crawley crosses the Thame at the site of the stepping stones during a Ramblers’ 2003 demo; her husband Hugh researched and made the claim to have the crossing recognised as a right of way. The footings of the former weir-bridge can be seen behind her. Photo Chris Hall.

Hugh Crawley’s research showed that until the 1880s there was a weir at this point which was also used as a footbridge. People crossed the river between Little Milton on the left (east) bank and Cuddesdon on the west. On the east bank two footpaths converged at the site. On the west bank two paths also converged (see map). Whichever your direction the weir-bridge saved a deal of circuitous walking to the next bridges (a couple of miles to the north and south).

Common sense
The paths are still there, now on the definitive map as Little Milton FPs 4 and 5 and Cuddesdon & Denton 19 and 21. Common sense suggests a right of way across the river; there is and has been no other reason for walking to the Thame at that point other than to cross to the other side. Great Milton Parish Council in the 1890s said that ‘a valuable right of way … had fallen into disuse through the decay of the bridge’ and with its neighbours pressed the Headington Rural District Council (the highway authority) to act, but the council refused stating (without reasons) that it did not believe there was a right of way.

In 1898 the stepping stones made their first appearance on the OS map, replacing the weir-bridge. They remained in use until at least the 1960s when a local footpaths society tried to have the crossing placed on the definitive map. OCC resisted and won. The claim was dealt with by a civil servant with little or no understanding of highways law; nor had the history of the route then been researched. But despite the gradual decay and dispersal of the stones people continued to cross or try to cross there, no doubt attracted by the legend ‘stepping stones’ on the OS maps and by the fact that nobody has ever tried to stop them. The solicitors, Bircham Dyson Bell, hired to oppose the creation order in the present proceedings, point to the lack of documentary evidence of a right of way. They also claim that any right of way over the river has been ‘annihilated’ because the stepping stones have disappeared and so has the tiny eyot in the river which was once linked to either bank by the weir-bridge. The stepping stones BDB claim (without evidence and in the face of OS surveyors’ findings) were never stepping stones but the remains of the bridge.

Controverts
The society engaged George Laurence QC and he controverts this argument essentially on the ground that it is still possible to cross the river on the route of the stepping stones albeit less conveniently than when they were in place. He also points out that OCC has been ‘overly concerned to find evidence of public use’; but s32 of the Highways Act 1980 ‘permits and requires regard to be had to documentary evidence’.

He summarises: ‘ … in a case such as this, which is based primarily on documentary evidence, it will usually also be the case that the same evidence which makes it reasonable to allege that public rights subsist [the test applied in granting Mr Crawley’s appeal], will also permit and require the tribunal to conclude, on a balance of probabilities [the test in the present proceedings], that public rights do subsist’.

There is to be a public inquiry in due course. 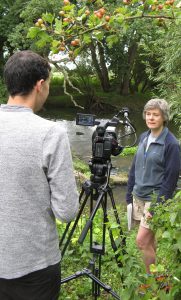 Kate Ashbrook was interviewed at the site

Postscript:  the public inquiry was held on 8-10 March 2016 and the society appeared in support of the order, represented by George Laurence QC. Oxfordshire County Council adopted a neutral stance.  Unfortunately the inspector, Mark Yates, refused to confirm the order.  His report (which should be dated 13 May 2016) can be found here.