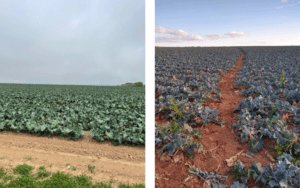 The brassica crop on St Ervan footpath 16, before and after. Photo: OSS

Following a threat of legal action, a landowner has removed crops which were obstructing the route of a public footpath at St Ervan, three miles south-west of Padstow in Cornwall. The landowner is a St Ervan parish councillor.

Cornwall Council, the highway authority, had failed in its legal duty to ensure the path remained unobstructed, and so the society stepped in.

St Ervan footpath 16 [1]  had been blocked for a number of years, and the Ramblers persuaded Cornwall Council to take action in removing the obstructions (pig net, barbed-wire fencing, timber railing, overgrown and infilled stone stile, hedging, electric fencing, crops, and rabbit mesh) in October 2021. It took a request under the Freedom of Information Act to reveal that the cost to the public purse, of removing obstructions for which the landowner was responsible, was an astonishing £24,946. Moreover, gates were subsequently installed which are not to the required standard.

Our local correspondent for north Cornwall, Lucy Wilson, visited in June 2022 to check whether the gates too were obstructions. She found the path across two fields to be obstructed by crops: brassicas and cereal.

Under section 137A of the Highways Act 1980 the occupier of the land has a duty to take the necessary steps to ensure that the line of the footpath on the ground is clear to a width of at least one metre, and to prevent crops from encroaching on the highway. This was not done on footpath 16.

Lucy found evidence that the path had been cropped the previous year too. Her long experience with Cornwall Council had taught her that she could not rely on the council to get the path cleared. So, as well as reporting the obstruction to the council in mid-June, she prepared to serve a legal notice directly on the landowner.

On 27 June Lucy arranged for photographs to be taken of the crop. On 28 June she wrote formally to the landowner, setting out the law and giving seven days in which to remove the crops before she brought legal proceedings in the magistrates’ court. 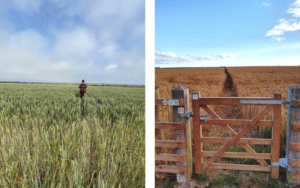 The wheat crop on St Ervan footpath 16, before and after. Photo: OSS

The recorded-delivery letter was signed for on 29 June, and by the evening of 30 June Lucy received photographs to show that the crops had been removed from the line of the footpath.

Says Lucy: ‘We are delighted that the landowner acted so promptly when threatened with action. If only Cornwall Council could show similar resolution about going to court it would get many more paths reopened much more quickly.’

Adds Helen Clayton, one of our case officers: ‘The threat of legal action directly against the landowner in this case was very much a last resort, but we considered it necessary after Cornwall Council apparently failed to do anything in response to requests that it exercise its duty to keep the path free of obstructions. We congratulate Lucy for her diligence, and we are pleased that the public can now enjoy the path freely.’