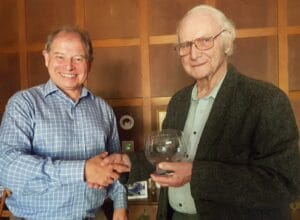 Mr Chris Beney of Bushey in Hertfordshire is the second-ever winner of the Open Spaces Society’s rarely-presented Eversley Award for Outstanding Personal Endeavour.

The award is named after Lord Eversley, the distinguished founder of the society in 1865, and for many years its president and chairman.  It is presented occasionally by the trustees to people who have typically given a lifetime’s service or undertaken long-term work, for the protection of commons, greens, paths and public access.  Chris Beney is the second winner.  The award was presented at the society’s annual general meeting.

Chris has devoted his life to public paths and access for at least the last 30 years.  In addition to the work he has done for the society, he chaired the British Standards Panel for three revisions of the British Standard for gaps, gates, and stiles (BS5709).  He was able to obtain agreement from users, local authorities, and land managers for the changes made, including the shift in attitude so that now the least restrictive option is favoured on public paths, making it much easier for people of limited mobility to enjoy routes across England and Wales.

Chris remains active locally, having undertaken physical work on path improvements, and ensuring proper recording on the official maps and signposting of paths so that people have the confidence to use them.   He has also been a local pioneer in encouraging landowners to dedicate their land for access, and to provide additional benefits.

Said Phil Wadey, chairman of the society: ‘Chris has made a massive difference to people’s ability to enjoy our public paths, whether on foot, horseback, bike or horse-drawn carriage.

‘The highlight of Chris’s work has been his unique ability to reach agreement among the diverse and conflicting interests of landowners, users, councillors, and officials. His way of dealing with people has made him able to negotiate difficult subjects well, and with resulting success.’

Responds Chris Beney: ‘It was a lovely surprise to be the recipient of the rarely-made Eversley Award.  After a reasonably successful engineering career I was lucky to retire early and get involved in the taming, noise wise, of light aviation.  That led directly to an interest in rights of way and access to the countryside.  I had always admired the Open Spaces Society with its long and distinguished history and somehow I got involved, not just as a trustee but as a local correspondent in Hertfordshire, and as their representative for the British Standards path-structure work.

‘Now, only a few months from my 90th birthday, I have slowed down a lot.  So this Eversley Award is a very timely boost and much appreciated.’

Find out more about the Eversley Award and its previous winner here.