We have welcomed the decision of Cumbria County Council to register land at Goose Holme, Kendal, as common land.

The decision was made at the council’s development control and regulation committee on Friday 9 October, and will add about 0.45 hectares of land, much of it comprised in the bed of the River Kent, to the common-land register. 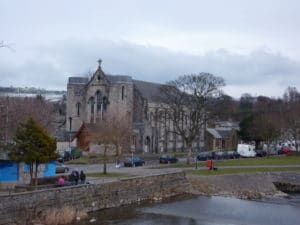 The application to the council was made in June 2019, and sought to add to the existing registration of Goose Holme, now a park on the east bank of the river in the centre of Kendal.  The application land also includes land at the northern end of Goose Holme adjacent to St George’s Walk and south of Gooseholme footbridge.  The extent of the application was made on the basis of a 1910 scheme for the management of the land, which continues to regulate the use of Goose Holme and New Road commons.(1)

Hugh Craddock, one of our case officers, said: ‘We are glad that the council has decided to grant our application to register land at Goose Holme.  Registration will strengthen the protection for the park and for the river bed in the vicinity of the park.’

Hugh continued: ‘Some have criticised the application for delaying Kendal’s much-needed flood defence scheme.  That criticism is wrong—the application has made no difference to the scheme.  Flood defence measures affecting Goose Holme common, incorporating the River Kent included in the 1910 scheme, are works on common land which require the consent of the Secretary of State regardless of whether the land is registered common land.’

Commenting on a recent press report that the society had said the application land should not be used for the flood defence scheme, Hugh added: ‘The society has not opposed this scheme, just as it has not opposed plans for a replacement Gooseholme footbridge.  But we will object to proposals which do not respect Kendal’s heritage of its town-centre commons.(2)  Reported allegations that the society’s application is a “delaying tactic” are untrue, and an excuse for delays which have nothing to do with the society.’

(2)The society objected to the application to the Secretary of State for consent to the replacement Goose Holme footbridge, on the grounds that the west bank approach, sited on New Road common, made poor use of the available space adjacent to Melrose Place, and lacked any provision for steps (as opposed to a ramp).  The society’s objection expressly did not relate to the bridge itself.