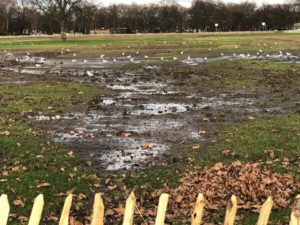 Clapham Common fenced off to allow recovery after event

Our local correspondent Jeremy Clyne has written to Lambeth Council to protest against the exploitation of open space in the borough, and the damage caused.

The situation has become so critical that local people are saying the flagship Clapham Common might be better renamed ‘Clapham Commercial’.

A large swathe of the common is still fenced off weeks after the end of a major winter event because of serious damage to the ground.

Now the council is applying to itself for blanket planning permission to hold more than 100 days of events this year. It has been flooded with objections to the proposal. Residents complain that these so-called temporary events, many causing significant noisy disturbance to residents, are becoming a permanent feature of the common. The periods that event sites are in use include the set-up and derig days, in addition to the events themselves, making the use sometimes almost continuous.

And this 105-day application does not include the next Winterville festival which is intended to be the subject of a separate application.

The ‘events site’ was fenced off in November in preparation for the Winterville festival which lasted for some five weeks until the New Year. Now, more than three months after the area was first closed off, the public is still excluded from this large area with little apparent prospect of an early reopening to common users. 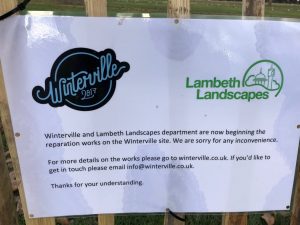 So much damage has been caused that the organisers say they have had to call in ‘specialist agronomists’ to help with a major repair operation. Faced with local anger the council has taken to issuing updates on the internet.

Says Jeremy: ‘We deplore the exploitation of London’s precious open spaces for damaging commercial events. And this is not the first time that this part of Clapham Common has been trashed, requiring it to be closed off for months to allow recovery, only for the same areas to be wrecked again by the next major event.’

In a separate development the society has written to the Planning Inspectorate over a proposal by Lambeth to allow a school to be set up on the common, involving new buildings and enclosure. The society says this is being achieved by stealth after a one o’clock club on the common was quietly allowed by the council to be used by a local school. Now the council is seeking to formalise the situation requiring permission from the Secretary of State for works on common land under article 12 of the Greater London Parks and Open Spaces Order 1967.