We have called for post-Brexit funding for agriculture to include support for public access to the countryside. The society has responded to the government’s consultation, Health and Harmony: the future for food, farming and the environment in a Green Brexit, a precursor to the Agriculture Bill.

The government has said that public money must pay for public goods. Accordingly, we have sent the government a plan setting out how public access can be supported. 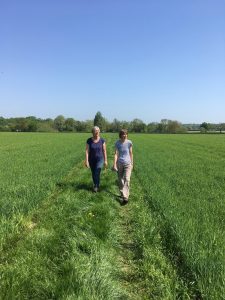 We argue that any new funding-scheme should include financial support for landowners who provide additional access or improvements to existing access.

New access could be along defined paths, or freedom to roam, or both; it must be well publicised, targeted to where it will bring public benefit, and ideally permanent.

For example, this could include new routes to enable walkers, riders and cyclists to avoid using roads, or to link up existing paths to create circular routes.

There should also be rewards for enhancing existing access, by, for instance, increasing path widths, leaving a path across arable fields undisturbed and uncultivated, or mowing a field-edge route and preventing encroachment by vegetation.

The society says that it is important that those who receive grants and have existing public paths on their land should ensure that all legislation is complied with, ie keeping paths clear of obstruction and reinstating them after ploughing. This requires a robust cross-compliance scheme, which does not exist at present.

Says Hugh Craddock, one of our case officers: ‘There is a unique opportunity greatly to improve public access to the countryside. However, it must be properly enforced to ensure that public money is providing public benefit, so we have called for a strict process to ensure cross-compliance.

The society has joined the British Horse Society, the Mountaineering Council, Cycling UK and the Ramblers in a petition calling for the government to ensure the Agriculture Bill protects and enhances public access to the countryside.

The society has also called for a better deal for common land in the Agriculture Bill.

Says Hugh: ‘Commons, in upland and lowland England, are important for their wildlife habitats, landscape, archaeology, cultural heritage and opportunities for recreation as well as, in some areas, the viability and profitability of farming enterprises.

‘But the existing mechanisms for protecting commons through agricultural support often do not work because individuals can thwart an agreement. We have proposed that the government takes powers in the Agriculture Bill to provide for agreements to be made more readily for our unique common land.’