Our stand against the grandstand3 min read

We save common land at Richmond Low Moor, North Yorkshire

We have welcomed a court order setting aside the removal of common land from Richmond Low Moor following the society’s legal action.

On 21 June 2021, North Yorkshire County Council granted an application by the Richmond Burgage Pastures Committee to deregister common land at the old racecourse on Richmond Low Moor.[1] The application included not only the historic listed grade 2* grandstand, Zetland stand and isolated judge’s box, but parts of the common surrounding the buildings.[2]  The applicants said that these buildings, once integral to racing on the downs, had significant curtilage which also should be deregistered.

The society objected, because it said that the buildings had not been used for racing since it ended in 1891, and any curtilage they had had in racing days had long since ceased to exist.  Nevertheless, the council granted the application,[3] saying that, ‘the historic use of the buildings provide [sic] the only reasonable means of considering the extent of any curtilage.’  The society challenged the outcome, and the council agreed to the decision being quashed by order of the High Court.

Says one of our case officers, Hugh Craddock: ‘The racecourse buildings on Richmond Low Moor are historic, striking, and much in need of rebuild and renovation.  We have no objection to their being removed from registration as common land—they should not have been registered in the first place.  But we do object to additional land being removed from the common on the basis of historical speculation as to how it was used on race days in the eighteenth century.

Hugh added: ‘We showed in our opposition to the deregistration of Blackbushe aerodrome[4] ,and now in our defence of Richmond Low Moor, that the rules on deregistration of “curtilage of a building” are to be strictly applied, and not a licence to take common land into private control just because there happens to be a building nearby.  We expect other landowners to take notice, and to curb their ambition in future applications affecting common land.  The society has throughout its 157-year history defended common land from private interests and we shall continue to do so.’

[1]The application was made under para.6 of schedule 2 to the Commons Act 2006: this permits the deregistration of common land which has been covered by a building, or the curtilage of a building, between (in this case) 17 June 1968 and 1 May 2020.

[3]The council’s Planning and Regulatory Functions sub-committee met to consider the application on 14 June 2021 (report, pp.85–206, YouTube beginning at 13’21” and lasting about 10 mins). The committee recommended that the application should be approved, and it was granted by the chief executive on 16 June 2021. 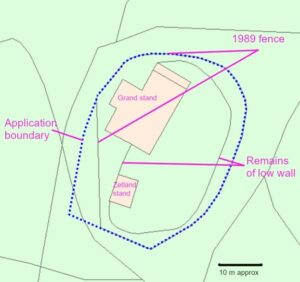 [4]The society backed Hampshire County Council in defending its decision not to deregister common land at Blackbushe aerodrome. The council against won Blackbushe Airport Ltd (BAL) in the High Court and the Court of Appeal with the society intervening. BAL has applied for leave to appeal to the Supreme Court.