We have won a prestigious international award for our work on common land. Our general secretary, Kate Ashbrook, received the first-ever Elinor Ostrom Award at a global conference in Japan last week. 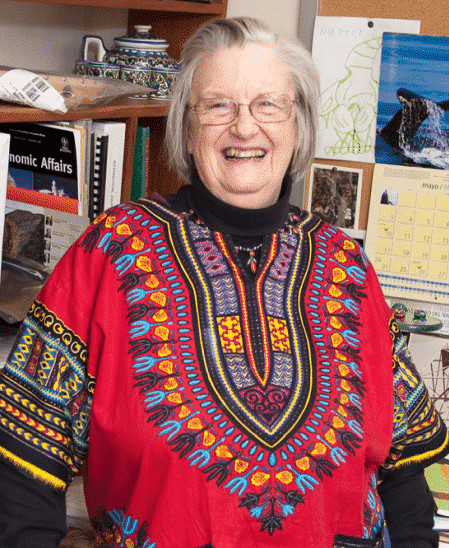 The award was established by 15 institutions in memory of the renowned academic expert on commons, Elinor Ostrom of Indiana University, who died last year. It promotes the work of practitioners and scholars who are involved in the field of commons, and celebrates Ostrom’s writing on the value of common resources and international collective action. The Open Spaces Society is one of eight award-winners for its ‘long stewardship of the commons and its impact on commons policy and management both in the UK and Japan.’

The society was nominated for the award by the Countryside and Community Research Unit of the University of Gloucestershire. Other winners included organisations in India and Mexico and individuals from India, South Africa, the USA and the Philippines.

The video of Kate’s speech after receiving the award can be seen here.

Says Kate Ashbrook: ‘Elinor Ostrom was a great advocate of the collective management and protection of commons and it is an honour to receive one of the first awards in her memory.

‘The Open Spaces Society has been campaigning for common land for nearly 150 years, longer possibly than any other organisation. We have lobbied on behalf of common rightholders and the public to ensure that the many interests in commons are protected and can flourish. It is wonderful that we have received this international recognition for our work.

‘We are particularly pleased that the range and effectiveness of the society’s work is recognised and commended not only by the Countryside and Community Research Institute (CCRI), University of Gloucestershire, England but also by our referees.’ 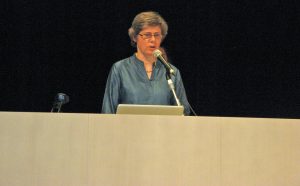 “I will not review all of the ways that Open Spaces Society meets the criteria for the Elinor Ostrom Award, as that is ably summed up in their statement. Suffice it to say that their work has widespread and long-lasting implications for the governance of the commons, not just in England and Wales, but globally.”
” …..the paramount important institution is the OSS but it has had profound impact on commons activities overseas. Particularly its influence on the modern and industrialised society like Japan is worthwhile to note”
“The society has campaigned tirelessly and effectively for the protection of commons and open spaces in England and Wales for nearly 150 years. This work has involved both promoting litigation to protect the legal rights of the public in commons and village greens, and also political lobbying to protect the commons and village greens for future generations”.
“The organisation has to its credit court hearings in the past which then provides a valuable precedent and a legal background to support endangered communities to withstand powerful forces which threatened to disinherit commoners at every turn of the political economy of England from feudal enclosures to urban encroachment and now protection from policies such asfor ‘growth and infrastructure’ “.
“Although very small in terms of staff employed and very frugal in terms of its overheads, the Society has a big voice that is heard loud and clear within the corridors of power in this country. It strikes a skilful balance between on the one hand periodically lobbying, campaigning and cajoling in a fearless way on the big issues of the day affecting commons, and on the other hand working constructively behind the scenes with Government officials and other key players to deliver real and lasting achievements within this important field of public policy”.