With a government announcement on the review of England’s protected landscapes imminent, our general secretary Kate Ashbrook reflects on the seventieth anniversary of national parks and the work still to be done. 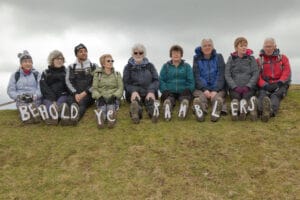 Two years ago, I enjoyed a wonderful day in the Peak District—a place I love and to which I long to return once we have greater freedom of movement.

The event was the celebration of the seventieth anniversary of the National Parks and Access to the Countryside (1949) Act, and the campaigners who made it happen. The organisations present on that day had been involved in campaigning for the original act, which was a significant milestone in improving people’s opportunities to enjoy the countryside and resulted in the first national parks in England and Wales.  The very first of these was the Peak District which celebrated its own seventieth birthday just a few weeks ago.  The 1949 act also gave us national trails and the definitive maps of public paths.

We started with a couple of hundred walkers gathering in a car park in Castleton. There was some excitement for the walk ahead, and also because of the presence of Countryfile TV cameras.

From Castleton we walked up to Hollins Cross where members of the Sheffield and Manchester Ramblers recreated a much-loved historic Ramblers’ photo. It was a little windy and the letters were more difficult to attach to the feet than we had expected, but we got there in the end.

Following the walk, we made our way back down to the excellent Castleton YHA (Losehill Hall) for some warming food and speeches.

This celebration was a reminder of our shared cause and history in campaigning for the 1949 act, and the value in coming together to create positive change. It was also a chance to reflect on the challenges for national parks today, including the pressure from damaging major development, changes to land-use practices, loss of biodiversity, and a lack of easy access for those without a car. There has also been a renewed focus on making sure that everyone, from whatever background, feels welcome in our national Parks. 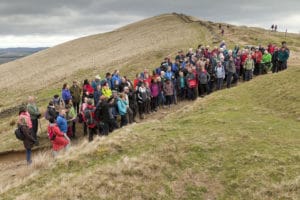 Attendees at the 70th anniversary walk at Castleton in the Peak District, March 2019

In honour of the seminal 1949 act, the Open Spaces Society, Ramblers, YHA, CPRE, and Campaign for National Parks signed a pledge that day, promising to work together to emulate our historic collaboration in the twenty-first century for the greater good of the national parks. It read:

We the undersigned, pledge to continue campaigning for a stronger future for the National Parks of England so that they remain just as beautiful for current and future generations to enjoy.

Our shared vision is that there will be more and better access to these landscapes so that they can benefit even more people, improving their health and wellbeing, as well as instilling a love for these special places.

We will work together to encourage and enable partners, businesses and our networks across the country to play their part in creating thriving National Parks both for the people who live in them and those who visit.

Since then, we have continued to work together, most notably to influence the outcomes of the Glover review of protected landscapes which was published in September 2019. The report itself was full of ambition for how our national parks and areas of outstanding natural beauty can meet our needs in the 21st century. As an independent review however, it makes no promises for government action. Although it was initially welcomed by the then Secretary of State for Environment, Food and Rural Affairs, we are still awaiting the official government response, rumoured to be coming out soon.

While we wait, we remain as committed as ever to working together—as those campaigners did more than 70 years ago—to ensure our precious landscapes are richer in nature and open to all, so that everyone can benefit from them for generations to come.

Read our original Pledge To Protect And Preserve National Parks In Celebration Of Their Seventieth Anniversary article from March 2019.