A route at Trunch in North Norfolk, which was recorded as a public footpath, has recently been confirmed as a restricted byway with rights for riders, cyclists and carriage drivers as well as walkers. 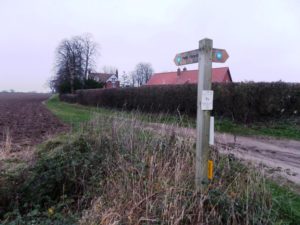 Ian Witham, our local correspondent in Norfolk, discovered evidence to show that the 500-metre Postle’s Lane, in Trunch three miles north of North Walsham, had been wrongly recorded as a footpath on the county council’s definitive (official) map of public paths. He made an application to the council for it to be recorded as a restricted byway. The landowner objected but the inspector, Mr K Saward, who was appointed by the Planning Inspectorate to determine the case, backed Ian Witham and confirmed the route as a restricted byway.

Postle’s Lane, which is part of the Paston Way recreational path, connects Brewery Road to the south and Southrepps Road to the north.

The inspector noted that Ian Witham had provided sufficient documentary evidence to prove the route should be recorded as a restricted byway. This evidence had not been discovered at the time the route was first added to the definitive map, on the basis of evidence of public use on foot, in 1988.

Although the road might in the past have been used by mechanically-propelled vehicles, the Natural Environment and Rural Communities Act 2006 extinguished unrecorded vehicular rights in most circumstances and so Postle’s Lane is to be recorded without vehicular rights.

The rule is ‘once a highway, always a highway’, so it is necessary to prove that a route has been a highway in the past and that it has not been closed or extinguished. However, the government has ruled that on 1 January 2026 unrecorded rights will be extinguished for ever, so it is vital that applications for unrecorded routes are made before that date.

Says Ian Witham: ‘I applaud the efforts made during the 1980s that got Postle’s Lane recorded as a footpath, but the evidence unearthed since clearly shows that this is a byway, and it is high time that it was recorded as such. This upgrade will make a positive difference to horse-riders in the village, as well as any cyclists and carriage drivers. There are a couple of other, similar upgrades that we are currently seeking elsewhere in the parish.

‘It is important that routes such as these across the country get researched and claimed before the cut-off in 2026 which is getting ever closer.’

Ian has shown a fine example by researching the historic evidence and proving that this route has more rights than originally supposed. We are at risk of losing many rights unless we discover and apply for them to be added to the definitive maps before 1 January 2026—less than seven years away.

We are working with the Ramblers, British Horse Society and other organisations to ensure such routes are identified.