Access campaigners have called for a new movement to campaign for a ‘Natural Heath Service’ through greater access to our countryside. The proposal was presented at the 90th anniversary celebrations of the Kinder Scout Mass Trespass at Hayfield on Saturday (April 23). 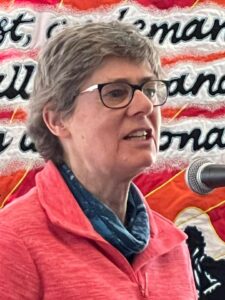 Kate Ashbrook, our general secretary, told a packed audience in The Royal Hotel: ‘We need a new movement for access, and we need everyone to work together. Today is the opportunity for us all to get together to develop and implement our next campaign for access—a much broader movement than ever before—to provide a true legacy to Kinder.’

Kate condemned the recent ditching by the government of the promised ‘quantum shift’ Review on Access, which had been initiated by the Treasury and would have given the opportunity to argue the economic—and health—benefits of access. ‘This is not just from increased spending by visitors,’ said Kate, ‘but also by savings through improving people’s health and well-being—the Natural Health Service.’

Caroline Lucas, the first Green Party MP, claimed that our green and pleasant land should no longer be regarded as a luxury for a privileged few to enjoy. She said the UK should follow the lead given by Scotland, Norway and Sweden, where the right to roam had long existed as a common right.

Caroline explained that she had tabled an Early Day Motion in Parliament celebrating the 1932 Kinder trespassers and calling on the government to extend the provisions of the Countryside and Rights of Way Act to include rivers, woodland, grasslands, and the green belt.

‘The UK is one of the most nature-depleted countries on earth,’ she said. ‘I genuinely believe that by extending the right of access to the countryside, we’d see a renewed effort to protect and restore nature and biodiversity. It is high time for a rethink of our approach; to reclaim the earth which was taken from us,’ she added.

Stuart Maconie, broadcaster, author and president of the Ramblers, emphasised one of the legacies of the trespass had been to illustrate the effectiveness of taking direct action where there was a justifiable cause. ‘No one ever got anywhere by going cap in hand,’ he claimed. 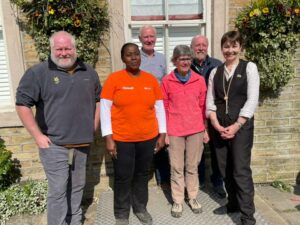 The meeting, which was chaired by Dave Toft of the Hayfield Kinder Trespass Group, started with a poem about ‘Our hills’ by Gracie from Hayfield Primary School. Other speakers included Craig Best, General Manager of the Peak District for the National Trust, which has owned and managed Kinder Scout for 40 years, who reassured the audience that Kinder was ‘For everyone, for ever,’ and Yvonne Witter, leader of Mosaic, the collective representing BME communities, and a member of the Peak District National Park authority. Keith Warrender of Willow Publishing also launched his comprehensive new book on the Trespass, Forbidden Kinder.

Fifteen other outdoor and conservation bodies had stands in a specially erected marquee next to The Royal. In addition, the Loughborough University School of Architecture staged an exhibition of prospective designs for a new Trespass Centre in Hayfield in the village hall, where the village primary school also put on displays of children’s poetry.