Herefordshire’s historic Boat Lane, near Ross-On-Wye, is now on the map2 min read

We are delighted that the ancient Boat Lane, in the parishes of Goodrich and Walford south of Ross-on-Wye, has been added to Herefordshire Council’s definitive map of public paths, after a 20-year campaign. 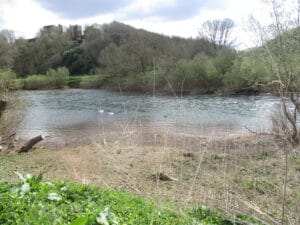 The route was claimed in 2003 by the society’s former local correspondent for south Herefordshire, Owen Morgan.  He argued that the lane was a public highway which should be recorded as such on Herefordshire Council’s definitive map of public paths.

The route, which is over a mile long, runs from the C1274 road between Ross-on-Wye and Walford, south to the River Wye, and then resumes on the other bank to run south again to the C1260 road in Goodrich.  There used to be a ferry crossing, marked by two milestones, but it became disused when Kerne Bridge was built in 1828 to the south-east.

Herefordshire Council reviewed Owen’s evidence and considered that the path should be recorded as a restricted byway, with rights for walkers, horse-riders, cyclists, and carriage drivers.  Heather Hurley and Virginia Morgan, president and vice-president of Ross-on-Wye Civic Society, campaigned for many years to support the addition of the path to the map.  Heather, a local historian, was able to supply many of the critical maps and documentary evidence.

There were two objections from affected landowners, so the matter was referred to the Planning Inspectorate for determination on behalf of the Secretary of State for Environment, Food and Rural Affairs.  The inspector, Gareth W Thomas, considered that there was sufficient documentary evidence to show that the route should be recorded, and he has confirmed the order.  Now the Council must ensure that the path, which is obstructed and overgrown in places, is usable, signposted and waymarked.

Says Kate Ashbrook, our general secretary: ‘We congratulate Owen Morgan for initiating this important path claim, and thank Ross-on-Wye Civic Society for its support.  It is exasperating that this has taken 20 years to resolve, but we are delighted that the path has at last been added to the map.  It is a historic route and deserves to be recorded and enjoyed by the public.’

Virginia Morgan has been a supporter of the Open Spaces Society for several years and, in 2004, on Owen Morgan’s advice, she and members of her family completed the evidence forms (MO4) describing their use of Boat Lane; she even sent in a photograph dated 1976 showing a family outing on the riverbank.