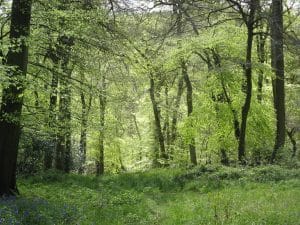 Commonhill Wood near the development site is crossed by public paths

We are delighted that Wycombe District Council, Bucks, has rejected an application from West Waddy ADP to build up to 140 dwellings at Little Studdridge Farm, south of Stokenchurch in the Chilterns Area of Outstanding Natural Beauty (AONB).

The society joined many local objectors, including Stokenchurch and Ibstone Parish Councils and the Chiltern Society, in opposing the scheme.

The reasons for refusal included the fact that the proposal was a major development in the Chilterns AONB and that the applicant had failed to show that there were exceptional circumstances to justify that the development would be in the public interest.  It failed to protect the rural character of the area or to respect the sense of place of Stokenchurch, and it would extend Stokenchurch into open countryside.

We were deeply concerned that this major development would destroy the peace and tranquillity of this part of the AONB.  We were also opposed to the adverse effect it would have on people’s enjoyment of the nearby public footpaths and the eyesore it would create.