We are delighted that Forest of Dean District Council’s has rejected the proposed measure to make so-called irresponsible shepherds into criminals.

The council has decided, on the chairman’s casting vote, not to invoke its proposed Public Spaces Protection Order (PSPO) in the village of Bream, three miles north-west of Lydney in Gloucestershire.  The council wishes to address the problem of sheep wandering through the centre of the village, causing a nuisance.

PSPOs were introduced in the Anti-social Behaviour, Crime and Policing Act 2014 as a means of reducing crime and anti-social behaviour in public places, defined in the orders as Restricted Areas.

The society objected to the use of a PSPO at Bream, which it considered to be excessive and oppressive, covering a wide area; the society said that it could endanger lawful commoning and potentially make criminals of innocent people. 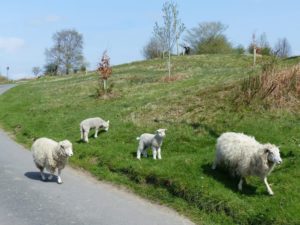 The society pointed out that the order was flawed.  Its terms were vague, the offence being to ‘take sheep into, or permit sheep to enter, or to remain on land in the Restricted Area’.  It was unclear what a grazier must do to avoid being caught by this provision.

The society argued that the plan accompanying the proposed order took in much more than the public places (ie the roads), and therefore was invalid.

Says our general secretary, Kate Ashbrook: ‘We are astonished that the report to the council apparently ignored our response to the consultation.  Nevertheless we are highly relieved that the proposal had been abandoned.

‘The society helped to advise the Home Office on the application of PSPOs during the passage of the Anti-social Behaviour, Crime and Policing Act through Parliament.  We are convinced that parliament never intended PSPOs to be used as a blanket measure where there are alternative, specific, remedies available.

‘We repeat our offer to assist the district council in finding a solution to this problem.’