‘Finsbury Park, and other open spaces in London and beyond, are vital for our health and well-being.’ So said Kate Ashbrook, our general secretary, at celebrations to mark Finsbury Park’s 150th anniversary.
Kate was taking part in a discussion group, with Catherine West, MP for Hornsey and Wood Green, and Hugh White, chair of the Finsbury Park and Stroud Green Neighbourhood Forum, on Saturday 10 August.
Said Kate: ‘The Open Spaces Society, founded in 1865 as the Commons Preservation Society, is four years older than Finsbury Park. At that time, we were saving spaces such as Hampstead Heath, Epping Forest and Wimbledon Common, with legal expertise. People were beginning to recognise and appreciate the value of open spaces for recreation and refreshment. Finsbury Park was and remains an important addition to London’s open spaces. 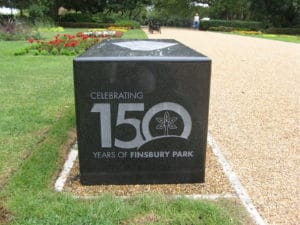 ‘Now these spaces are threatened from lack of public funding, which means the local authorities are failing to manage them properly, and from exploitation from commercial events which are damaging to the public interest, such as the Wireless Festival on Finsbury Park.
‘The Open Spaces Society supported our member, the Friends of Finsbury Park, in its courageous fight through the courts.
‘The society wants to help local people to protect their spaces for future generations to enjoy, and urges people to lobby their local councillors to care for the parks. This will take a London-wide effort to achieve.’
Catherine West spoke of the importance of Finsbury Park ‘as a green lung’ where there is a ‘sense of space’ and everyone ‘can run around and lie and watch the clouds’. She said that our wonderful greens and parks are there to provide comfort and solace in troubled times.
Those present raised concerns about the lack of management of the park and its use for commercial events. They expressed sadness that only one councillor from the three boroughs (Hackney, Haringey and Islington) was there, but they were delighted by the support given by Haringey councillor Eldridge Culverwell who said that Finsbury Park is ‘an important aspect of our lives and an absolute necessity for the elderly and the young.’
The event was followed by the launch of the book A Park for Finsbury by Hugh Hayes, published by the Friends of Finsbury Park (£9.99).