A planning inspector has ruled that 12 wind turbines on common land at Kirkby Moor in Cumbria, close to the Lake District National Park, can remain until 2027.

We joined the Friends of the Lake District and the Kirkby Moor Protectors in challenging the appeal at a public inquiry in January 2019. 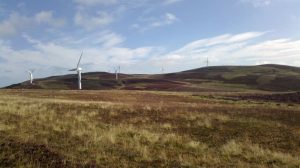 Says our general secretary Kate Ashbrook: ‘We are extremely disappointed by this decision and the inspector’s apparently cursory dismissal of the severe effect which the turbines have on the landscape and people’s enjoyment of it.

‘The turbines are highly visible from many directions, in particular from the Lake District National Park and when seen against the park’s backcloth. They occupy a significant area of registered common land, a unique and ancient land type, where the public has the right to walk, and commoners graze their stock. The moor is also crossed by public rights of way.’

The society strongly disagrees with the inspector’s conclusion that ‘I do not find that the enjoyment of rights of way would be significantly affected by the proposal’, and that ‘at most, the proposal would cause limited harm to the character and appearance of the area and that the landscape is more than capable of assimilating the windfarm for a further period without significant harm to its essential character’.

Says Kate: ‘The wind turbines are less than a kilometre from the Lake District National Park, a UNESCO World Heritage Site. This is a treasured landscape and we believe that it is severely degraded by the presence of the turbines.’

The wind turbines were originally granted planning permission by the Secretary of State for Environment in 1992, with a condition requiring their removal within 25 years of the date they were first brought into use (August 1993). Twelve turbines were constructed. In 2015 an application was refused for six replacement turbines in the same area.

Zephyr Investments then applied to extend the life of the turbines to 2027. This was refused by South Lakeland District Council on the grounds that the benefits arising did not outweigh the continuing adverse effects on the landscape and the setting and character of the Lake District National Park and the local economy.