The Open Spaces Society’s involvement with the Countryside Code precedes its first publication, as the Country Code, in 1951. In fact, with the Ramblers, we instigated it.

The society has always wanted to see greater access to the countryside and everyone to feel welcome there. In 1945 we noted that one of the difficulties we faced, when pressing for more public rights of access, was the charge that visitors misbehaved. As result, in 1943 we had formed a joint committee with the Ramblers to consider and report on behaviour in the countryside. While of course we believed that everyone should behave responsibly, we concluded that the problem was mainly one of education, and we drew up a comprehensive memo for the Minister of Education, setting out our proposals for a country code and recommending that there be widespread publicity for it. 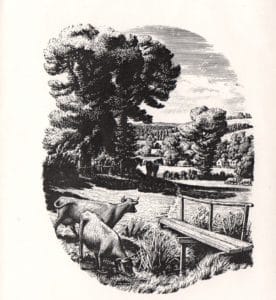 The frontispiece to the country code booklet, published in 1951 by the National Parks Commission. Drawing by James Lucas.

Nothing happened until the National Parks and Access to the Countryside Bill was going through parliament in 1949—at a time when freedom to enjoy the outdoors was of growing importance. The code was not included in the bill as published, and at the committee stage in the House of Lords Earl de la Warr moved an amendment to require the minister to prepare a country code. The government rejected this on the grounds that the proposed code would be too rigid and the procedures too complicated and that many of the points in the code were already covered. However, following intense pressure from ourselves and other outdoor organisations, at report stage the government conceded and amended the bill to require the new National Parks Commission to prepare and publish a code of conduct.

And so the country code was born, as section 86 of the National Parks and Access to the Countryside Act—a duty on the National Parks Commission which has been transferred through its successor bodies, the Countryside Commission and Countryside Agency, to Natural England and in Wales, under section 86A, to Natural Resources Wales. When it appeared in 1951 the society commended the code for not consisting of a series of ‘Don’ts’. We wrote in our journal of July 1951: ‘Its object is not to prohibit, but to invite all who enjoy the countryside to co-operate to preserve its beauty and order …’. Subsequently, with 45 other voluntary organisations, we arranged for the display of country code wall-posters.

The code has been revised a number of times over the years, but the core messages have remained the same. Following the Countryside and Rights of Way Act 2000 the code was extended to include open-access land and renamed the Countryside Code.

This year, in consultation with a wide range of interested bodies, Natural England and Natural Resources Wales have updated the code, in a timely move to reflect the growing interest in the countryside arising from the covid restrictions, and new activities in the countryside. We welcome the simplification of its messages, but the test will be whether it makes a difference, ensuring that people from all sections of society feel welcome in the countryside and confident to exercise their rights and freedoms there, while understanding their rights and responsibilities.

A copy of the revised code can be downloaded here from the Natural England website. Natural Resources Wales offer versions in both english and welsh.