We are pressing Gloucestershire County Council to reopen the ancient Bentley Lane, which runs to the east of Southam village onto Cleeve Common. The lane has been blocked by gates since 2010. 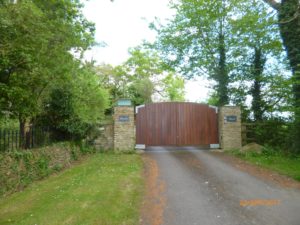 The old track is laid out in the Bishops Cleeve Inclosure Award of 1836 with a width of 30 feet. It leads directly up to a part of Cleeve Common which was the original Cheltenham Racecourse in about 1830. The lane was shown on the official record of public rights of way (the definitive map) as Public Bridle Road ASM25 and was used freely by the public until 2009 when it was peremptorily redirected into the adjacent field on the grounds that there was an error on the definitive map. Shortly after this, gates were erected across the lane.

In 2016 the Open Spaces Society and Ramblers questioned the legality of the closure and the gates, and the county council acknowledged the public’s claim to Bentley Lane. However, instead of seeking the immediate removal of the gates and reopening the lane to the public, the council chose to embark on a slow process of rectifying the definitive map error. It did so by making a diversion order under the Highways Act 1980, which the Open Spaces Society pointed out was the wrong procedure for correcting the definitive map.

The planning inspector, Rory Cridland, acting on behalf of the Secretary of State for Environment, Food and Rural Affairs, agreed it was the wrong procedure and rejected the proposal on 11 May 2017. Now the council has commenced a further slow legal process to establish that the definitive map is wrong and that the lane is indeed public — nine years after the lane was stopped up.

Says Gerry Stewart, our local correspondent: ‘The rule is “once a highway, always a highway” but that has not prevented the stopping up of the ancient Bentley Lane. We are dismayed that the county council has not challenged the erection of imposing stone gateposts and ornate, electrically-operated gates which prevent public access and obstruct the route.

‘The council has wasted nine years but we are pleased that it is now taking action to ensure this lovely old way is reopened for public enjoyment. The Open Spaces Society, with other local organisations and individuals, will press the council to remove the gates without further unnecessary delay.’

One of the many past users of the lane was Doctor John Garrett, then medical Officer of Health for Cheltenham Borough and a keen exponent of walking for health. He relates using the lane in his book From a Cotswold Height, published in 1919. More than 70 years later his son, John V Garrett, also recorded the pleasures of walking around Cleeve Common. He writes of Bentley Lane: ‘Of all the old trackways in the area it is the most evocative where you can imagine early travellers toiling up the hill and horses and carts laden with stone from the quarries coming down’.

‘It’s time that people can once again enjoy those pleasures as is their legal right’, comments Gerry. ‘We shall ensure that they can.’