On Sunday (6 March) with the National Trust we celebrated the 150th anniversary of the night raid to free Berkhamsted Common.  On 6 March 1866, the year after its foundation, the Open Spaces Society organised a trainload of brawny navvies to pull down Lord Brownlow’s illegal iron fences and reopen the common to the people.  In 1926 the common was acquired by the National Trust. Berkhamsted Common, the fencing was about here.

Said Kate Ashbrook, our general secretary: ‘This was a great event in the society’s history, and showed the need for direct action to free the commons from unlawful enclosure and secure them as public assets.

‘Today the society continues to campaign against enclosures—but the new enclosures are more insidious and just as serious.

‘We are fighting against unprecedented threats to our green spaces from all kinds of development.  We must claim all the unrecorded historic public paths before the official map closes on 1 January 2026 when they will be lost for ever, disappear under concrete or be blocked off.

‘Open spaces and paths were important in Victorian times, but they are even more vital today, for our health and well-being.

‘The society is fighting the new enclosure movement with as much tenacity and energy as it fought the unlawful fencing of Berkhamsted Common 150 years ago.’

On Sunday afternoon there was a celebratory event, with speeches from Emily Smith of the National Trust and Kate Ashbrook.  Then Emily 60 people on a walk across the common, to show some of the history. There is an exhibition at the Ashridge visitor centre until 31 March. On the night of 6 March 1866 the Commons Preservation Society (as the Open Spaces Society was then known), acting for a common-right-holder Augustus Smith, organised 120 navvies (tough men) to travel by special train from Euston to Tring Station, walk the three miles to the common and fell the fencing, leaving it in neat piles. 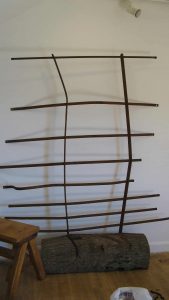 Iron railings, which could be part of Lord Brownlow’s fence, which was recently found on the common whic