We have helped to save the lovely West Beach at Whitstable in Kent from commercialisation.  Canterbury City Council’s Development Control Committee last night (8 March) unanimously refused plans from the Whitstable Oyster Fishery Company to erect a beach café near Coastguard Alley.

The society, with the Whitstable Beach Campaign and over 120 others, had objected to the proposal.

Says our general secretary Kate Ashbrook: ‘This is a splendid result.  The café would have suburbanised this unspoilt stretch of beach, destroying its open qualities, spoiling the views and interfering with public enjoyment.  The building site was right next to the popular long-distance path, the Saxon Shore Way and would have blocked another public footpath.

‘The planning officer’s report made it clear that the proposal would result in the loss of protected open space and would be a blot on the landscape.  He recommended refusal and the committee wholeheartedly agreed.

‘We congratulate Canterbury City on its far-sightedness in designating its beaches as Areas of Existing Protected Open Space in the Local Plan.  Beaches are immensely important, for their natural beauty and as places for recreation,’ says Kate.

Adds Nick Dewhirst, chairman of the Whitstable Beach Campaign: ‘We are delighted at this outcome.  We have prevented a damaging precedent being set.  Here in Canterbury we are fortunate that the beaches are protected open space.  We recommend that other coastal planning-authorities adopt a similar designation to protect their precious beaches.’ 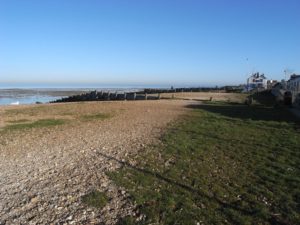 West Beach: the site of the proposed café.