Consent has been refused for the enclosure and quarrying of 1.25 hectares of common land near Haworth in the Bradford district of West Yorkshire. 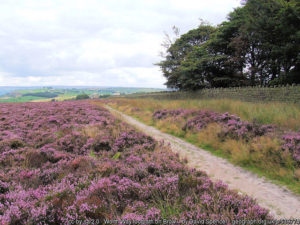 The application was made by The Mineral Planning Group, under section 38 of the Commons Act 2006 for consent for works on common land.  Such consent is needed in addition to planning consent (which was granted by Bradford Metropolitan District Council in April 2019).

With Natural England and a common rightholder, the society resolutely opposed the plan.

The objectors argued that the fencing and quarrying would interfere with the public’s rights to walk and ride over the common, and with the open landscape which is upland heath.

We said that according to the Department for Environment, Food and Rural Affairs (Defra) Common Land Consent’s policy of November 2015, section 38 of the Commons Act was intended for applications for works ‘which would confer additional protection on common land, rather than enabling common land to be used for purposes inconsistent with its origin, status and character’.  As these works clearly do not meet these criteria the applicant should have sought consent under section 16 of the Commons Act 2006 which requires suitable land to be offered in exchange.

The society said that the works, which were proposed to continue for 23 years, would interfere with people’s enjoyment not only of the 1.25 hectares affected, but also the common as a whole because of the noise, dust and vehicle movements, destruction of the landscape and blocking of public access.

The inspector agreed, saying that ‘the works will cause unacceptable visual harm to the landscape of the common’ and that the proposed screening bund would itself be visually intrusive.

The applicant argued that once quarrying had ceased it would be restored to enhance biodiversity, but the inspector concluded that ‘any benefits to nature conservation are substantially outweighed by the unacceptable harm the works will cause to those wishing to use the common for grazing and recreation and to its character and appearance’.  He refused consent.

We are relieved that the inspector agreed with us that these works were unacceptable.  The extension of the quarry would have had a devastating effect on this splendid common.  It is a popular area for recreation, with rights for walkers and riders, close to population centres.