We celebrate our 150-year struggle for open spaces3 min read

We have published our new book, Saving Open Spaces, the story of our 150-year struggle for commons, greens, open spaces and paths.  It is written by our general secretary for 31 years, Kate Ashbrook.

The society was formed in 1865 as the Commons Preservation Society to rescue London’s threatened commons—Hampstead Heath, Wimbledon Common and Epping Forest for instance—before going on to found the National Trust in 1895.  It soon expanded its remit to cover the whole of England and Wales, and to embrace all types of open spaces and public paths.  It is responsible for much of the legislation which protects these places today.

Charts
The book charts the society’s activities through the years—one of the most socially-vital campaigns of the last century and a half.

Writer and naturalist Richard Mabey, one of our vice-presidents, has written the foreword.  He recalls his boyhood in Berkhamsted Hertfordshire where, in 1866, the Commons Preservation Society was ‘nobly conspiring to throw down Lord Brownlow’s illegal fences’.

This direct action—forcible and legal— was a turning point in the history of commons. Says Kate: ‘The society is needed now more than ever as it fights a multitude of threats to open spaces and paths.  New laws endanger village and town greens, commons are still threatened with encroachment, and a politically-motivated cut-off in 2026 is set to prevent the recording of thousands of miles of ancient public paths unless we can get them on the map before then.’ The path through Andrew Lloyd Webber’s hamlet of Sydmonton, Hampshire, which the society helped to save in 1996. Photo: Dave Ramm

The book, published in conjunction with Pitkin (The History Press) is a 28-page paperback, lavishly illustrated in colour throughout. It is available for £5 here.

Roughly chronological, the spreads are headed:

Mix of methods
In the final chapter Kate notes: ‘The society has adopted a mix of methods to champion its cause: direct action as at Berkhamsted Common in 1866; drafting legislation, such as the Rights of Way Act 1932; court action, whether adversarial or friendly to establish a legal principle; lobbying and publicity; and, nowadays, social media.

‘We follow our dream of a land where everyone has open space close to their home, every public path is recorded and protected, and our commons are well managed and in good heart.’ 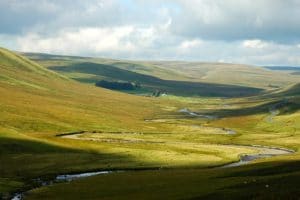 The Elan Valley where the society won rights of access to common land in the Birmingham Corporation Water Act 1892. Photo: Liz Fleming-Williams

We shall shortly be publishing a second book, Common Land, by our chairman Graham Bathe.