We are celebrating Cornwall Council’s addition of 4.84 hectares of Carrine and Goodern Commons to the register of common land, thus securing the public’s right to walk here and protecting the land from development.

The land is on the road from Penwethers to Pound Lane, three kilometres south-west of Truro. 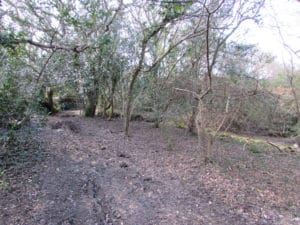 The newly-registered land near Truro

Common is land, originally, with rights of common to graze animals or collect wood for instance, dating back to pre-mediaeval times.  However, the land is not recognised as common until it is included in the common-land register, and much land was omitted when the registers were drawn up under the Commons Registration Act 1965.  The Commons Act 2006 reopened the registers to some extent, enabling omitted land to be added to the register in certain parts of England, including Cornwall.  The Open Spaces Society is running a project to rescue these lost commons.

Says Tomas Hill who made the application on behalf of the Open Spaces Society: ‘We are delighted to have succeeded in registering this lovely area of common.  Not only is it now protected from encroachment and development, but it is a significant stretch of land where the public may walk freely by right.  It is of particular significance to the people of Truro and the parish of Kea.’