We are dismayed that Wycombe District Council officers are recommending to the High Wycombe Town Committee on 3 October that it should support the closure of part of a valuable footpath in the town centre. This is despite objections from influential organisations representing walkers.

The Town Committee makes a recommendation to the Cabinet Member for Communities, Councillor Graham Peart. 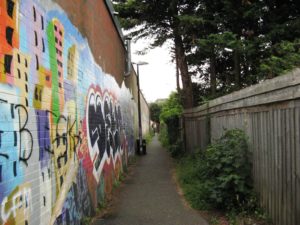 The council wants to impose a Public Spaces Protection Order (PSPO) on the path, which would close it to public use. It claims that the path is subject to crime and anti-social behaviour. The path is a short cut between Desborough Avenue and West End Street.

Last summer the council carried out a consultation exercise and there were strong objections from Open Spaces Society, Ramblers, Chiltern Society, a majority of the Buckinghamshire Local Access Forum (which advises Bucks County Council on rights-of-way matters) and some residents. Yet despite this opposition, the council’s officer, Sarah McBrearty, is recommending that the closure goes ahead.

This is an important, well-used and popular footpath. It is part of a much longer route extending between Rutland Street and Leigh Street.

Closure of the path will not eliminate the alleged problem of anti-social behaviour; it will merely push the problem elsewhere. Legitimate users will be penalised, and this could set a dangerous precedent for town-centre paths.

The council should make the path more welcoming, then crime would be less likely to occur. It is well known that bona fide walkers are eyes and ears—watchdogs who will spot and report criminal behaviour.

The alternative route is around three sides of a rectangle, alongside busy roads with traffic, on footways which are often obstructed.

Moreover, the issue is made more complicated as adjoining householders need access along the path, so there will have to be locked gates with certain people having keys.

We consider that the legal tests for a PSPO have not been met and we have urged the members of Wycombe District Council’s Town Committee to tell the Cabinet Member that it does not approve a PSPO for this path.