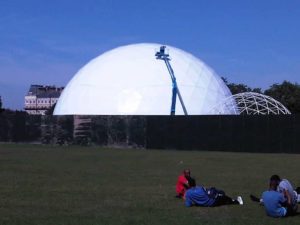 Got to Dance domes on Clapham Common, 2012

Over recent years the council has allowed a number of events involving the erection of huge structures, usually surrounded by large enclosures.  In many cases the common has been left damaged as a result, and the council has received numerous complaints from residents and local groups, including the Friends of Clapham Common.

As confirmed by the QC the council cannot permit these structures without first receiving ministerial consent from the Secretary of State for Environment, Food and Rural Affairs.  In the past the council has adamantly denied that the legislation, known as the London Parks Act 1967(2), applies to temporary structures despite the wording making clear that any structures, permanent or temporary, are not permitted without permission from the Secretary of State.

We have written to Lambeth Council cabinet member Jane Edbrooke asking her to confirm that in future the council will apply to the Secretary of State as required by the legislation.

As part of its drive to raise revenue from the borough’s parks the Council has allowed a series of large-scale events, mainly on Clapham Common, many requiring large structures such as the Nike ‘Fuelstation’ in 2012 and the Freeze Festival in 2013 and huge domes for a Sky TV ‘Got to Dance’ programme.  The ‘temporary’ Nike structure was in place for many months. Our general secretary Kate Ashbrook comments: ‘This legal advice confirms what the Open Spaces Society has repeatedly told the council.  It is important that laws designed to protect our precious commons and open spaces are respected.’