The Downs are for people, not for cars6 min read

A celebration of success after 25 years of campaigning

On 15 July our general secretary Kate Ashbrook and case officer Hugh Craddock joined group member, Downs for People[1] (DfP), for a celebration of the success in its recent court case challenging the secret grant of a twenty-year licence for zoo parking.  As well as putting an end to parking on the Downs for activities not taking place there, the court action has prompted the Downs Committee[2] to undertake a wide-ranging review of Downs strategy and governance.  The Committee has also commissioned a report into the handling of the court challenge[3]. 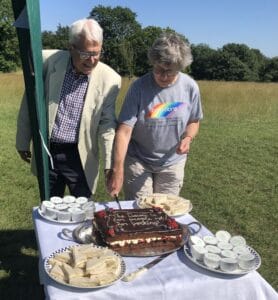 Kate Ashbrook said ‘The Open Spaces Society has been very pleased to support Downs for People and previous campaigners over the last quarter of a century. We are delighted that all the hard work has paid off and we can celebrate this victory today’.

Thanking the group’s supporters on the site on Ladies Mile that Bristol Zoo has used for parking since the 1960s, Susan Carter said:

‘With your help we have made sure that – once the Zoo leaves its Clifton site – the Downs will never again be used for parking for activities that are not on the Downs. This wonderful open space will remain as the Downs Act of 1861 decreed:  “A place for the public resort and recreation of the citizens and inhabitants of Bristol”.

It has been a long battle. The first campaign against zoo parking was in 1996, against a proposal for 102 days parking a year. Campaigners fought to bring parking under planning control and have objected to seven planning applications since.

We set up Downs for People in 2013 to co-ordinate campaigns. We have enjoyed support from many organisations. I would like to make a special mention of the groups which have supported our court case: we have had generous donations[4] from the Open Spaces Society and Bristol Civic Society. The Friends of the Downs and Avon Gorge, the Clifton and Hotwells Improvement Society, Respect the Downs, Cycle Sunday, the Bristol Walking Alliance and the Redland and Cotham Amenity Society have all contributed public statements.’

Susan Carter also thanked earlier campaigners, particularly Richard Bland, a well-known environmentalist and a founder member of Downs for People. She acknowledged that the group would not have made it through the court action without guidance from the Open Spaces Society and their barrister, Philip Petchey, who joined the celebration with two of the staff of the Open Spaces Society. 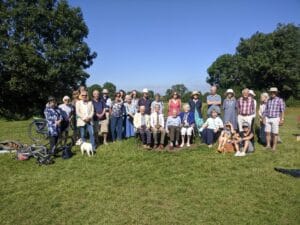 Attendees at the event on 15 July

She praised the press coverage and explained that Downs for People was not anti-zoo , saying: ‘We are grateful for the interest the press has taken in our story, a complicated one. We are glad they have understood that our campaign was against parking on the Downs, not against the Zoo . We were working with the Zoo on its transport plans when COVID forced closure last year. We told the Zoo at once that we would not campaign against parking if they were able to re-open then.

We are sad that COVID means the Clifton site will close permanently.   As part of our court settlement, we were happy to agree to the Zoo’s proposals to make use of both this site and its main North car park – which was also taken from the Downs –  until it moves.’

Looking to the future, Susan Carter said, ‘Court action is an expensive way of resolving disputes and should not have been necessary.  The Downs Committee refused to listen to our objections. We were pleased that at its meeting last week the Committee said it would be receiving a report on the handling of our case, probably next month. As much as possible will be made public.

Better still, the Downs Committee is going to review the strategy and governance of the Downs over the next year. We look forward to playing a part in that.’