On Tuesday 30 October we resume our opposition to the applications of the Secretary of State for Defence to deregister the extensive Warcop commons(1). 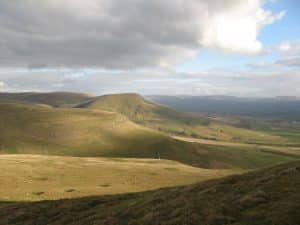 The applications, if granted, would cause Burton, Hilton and Murton Fells, in the Cumbrian North Pennines Area of Outstanding Natural Beauty, to cease to be common land after centuries—perhaps even a millennium or more—of commoning tradition.  This threatens to be the largest inclosure(2) of commons since the major inclosures of the eighteenth and nineteenth centuries—and it is unclear and ominous why the landowner, the Ministry of Defence, wishes to proceed with this.

The society, along with the Foundation for Common Land, the Friends of the Lake District, local commoners and parish councils, is opposed to the applications, and believes them to be entirely unnecessary.

When the inquiry resumes(3), the inspector Alan Evans will hear evidence about whether the Warcop commons, amounting to around 45 square kilometres (about 17 square miles), had ceased to be ‘waste land of the manor’ when the rights of common were extinguished in 2003—this means that the Secretary of State must show that the commons were no longer characteristic of typical upland commons, and that they had ceased to be ‘open, uncultivated and unoccupied’.

Hugh Craddock, one of our case officers, says: ‘It beggars belief that the Ministry of Defence continues to pour taxpayers’ money into pursuing paper changes to its management of the Warcop commons.  It spent £7 million in 2003 on buying out the rights of common, plus far more on legal and professional advice, and holding a public inquiry into the compulsory purchase.  Even so, it gave an undertaking not to deregister the common—but now it has resiled from its undertaking, and has come back for what’s left: the registration of the land as common land.

‘If it succeeds in deregistering the common, this splendid and extensive land will lack any protection against whatever plans the Ministry hatches for its future.  Any commitments given today will be no more valuable than the undertakings which the Ministry has already breached.’

Hugh adds that ‘The Ministry tells us that it no longer feels confident about the future of the Warcop training estate in the light of the Commons Act 2006’s provision for creating commons councils(4).  But it is misguided, and it simply won’t listen to reason.  No-one can understand why it is driven to pursue these applications, and in the absence of a plausible explanation, it is hardly surprising that people speculate on whether the Ministry is hiding plans for a radically different future for the Warcop training estate.’

Hugh concludes: ‘If these applications are granted, it will lead to the deregistration of over one per cent of the common land in England—the first inclosure on this scale since the mid-nineteenth century.  And this from a Government whose policy is that: “our stock of common land and greens is not diminished so that any deregistration of registered land is balanced by the registration of other land of at least equal benefit”.’

The society is represented at the inquiry by counsel, George Laurence QC and Ross Crail of New Square Chambers, who are acting for the society on near pro bonoterms.

2          ‘Inclosure’ occurs when land ceases to be common—it does not necessarily involve enclosing the land with fences, walls and hedges. Many commons were inclosed by parliament in the eighteenth and nineteenth centuries, involving both ‘inclosure’ and ‘enclosure’.

3          The inquiry will resume on 30 October 2018 at Kendal County Hall, Busher Walk, Kendal LA9 4RQ.  The inquiry opened on 13 September 2018, presided over by Alan Evans, a barrister, to consider the applications and advise the council whether they should be granted.  After two days of deliberations into whether the council has any power to grant the applications, the inspector adjourned the inquiry until 30 October.

4          The Ministry of Defence says that the Commons Act 2006 changed the legal landscape affecting the Warcop commons.  Its two principal contentions are that the 2006 Act means that ‘works’ on the commons would require the consent of the Secretary of State for the Environment, Food and Rural Affairs, and that there is the threat of the designation of a commons council, which could interfere with management of the commons.

But section 43(5) of the 2006 Act provides for land to be excluded by order from controls on works, and specifically was put in the Act with Warcop in mind.  So far as we know, no such order has been sought.

The Ministry is correct that a commons council may be established for any area of registered common land.  But the Warcop commons have no commoners, the Ministry would have control of any council, Defra (the establishing department) has no resources to establish new councils and its priorities lie elsewhere anyway, the decision to establish a new council for Warcop would be a matter for decision in cabinet committee, and (however unlikely) if one was established, collective responsibility requires that the decision to establish the council is a matter of Government policy which cannot be contrary to a department’s interests.