Our vice-president Ronald Smith has died aged 97.  He was our treasurer from 1989 to 1995, and we elected him as a vice-president in 2010 in place of his wife Margaret who died that year.  He was also our representative on both the Hampstead Heath Management and Consultative Committees. 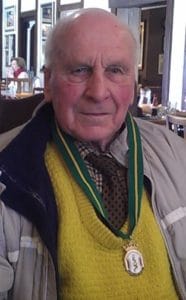 Ronald Smith on his 90th birthday

Ronald was born in Hendon in 1923 to Gordon and Nellie Smith.  He had three elder sisters.  He was educated at Hendon Grammar School and, according to his school reports, did exceptionally well.

In 1947 he took an open civil service entrance exam and was offered a post at the Inland Revenue in Bristol, with responsibility for auditing the newly-introduced pay-as-you-earn system.  It was here that he met Margaret; they were married in January 1948 and set up home in Bristol.

Ronald was an ambitious career civil servant.  In the early 1950s he was offered promotion to a post in the Home Office and moved to London.  His first personal assistant there, Catherine Cooper, recalled how he made her job much more interesting by taking her to meetings and on visits to prisons and remand centres.

He was offered short-term secondment to the Treasury with responsibility for auditing overseas territories.  He was also posted to both Kenya and Zanzibar.

In the 1980s he headed the Prisons Finance Division.  He retired in 1987 after 40 years, the maximum reckonable service permitted to a civil servant in those days.

By this time Ronald and Margaret lived in Potters Bar in Hertfordshire, and Ronald became involved with the Potters Bar Society, newly-formed in 1961.  He held various offices, and was its chairman and then life president.  He was a founder member of the London Green Belt Council and was its chairman from 1980 for 25 years and then vice-president.  He responded to countless consultations affecting the green belt, and wrote invaluable notes to accompany every meeting agenda.

Ronald was fascinated by the history of commons, and he acquired the title of lord of the manor of Plardiwick at Gnosall in Staffordshire which gave him much pleasure.

With Margaret he went on holidays to 55 locations, many of them far-flung and exotic; he would research the intended location long before the holiday so was well prepared when they arrived.  On their return they turned the holiday into a talk with slides, which they would present to a range of audiences, raising money for the Open Spaces Society and other organisations.  Between them they gave over 1,000 talks.

It was our good fortune that Ronald selected the society for his attention soon after his retirement.  On becoming our treasurer in 1989 he observed wryly that it was somewhat different from his role as Prisons Finance Officer when he controlled £550 million a year.

After Margaret’s death Ronald remained at their home in Billy Lows Lane, Potters Bar, for some years, and wrote amusingly about his tussles with technology.  He was delighted to acquire a mobility scooter which enabled him ‘to whizz round easily’.  However, he was defeated by his television when the screen suddenly admonished him: ‘You should not view this programme without your parents’ consent’, and by a new electric typewriter which kept producing symbols rather than letters.

I joined him at both his 90th and 92nd birthday parties at the Duke of York pub in Barnet, where he was in splendid form and generously provided a three-course meal for all his guests.  He spent his last few years in a home where, until Covid struck, he was regularly visited by his nephews and his many friends.

We remember Ronald with great affection, for his tireless work for the society, and his unstinting support for our cause.