We have received generous legacies from two members who we belatedly heard had died.  Our general secretary, with much supplementary information from their friends, remembers them with gratitude.

The champion of Chorleywood Common in Hertfordshire, our life member Olive Entwistle, died in June 2017 aged 92. 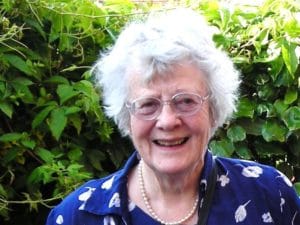 Olive was born in London in 1925.  Her father worked for the City of London police force and the family initially lived in Bishopsgate, but moved to The Retreat in Chorleywood, her grandfather’s home, at the outbreak of war in 1939.  Olive lived there for the rest of her life.

Olive’s family bought The Retreat in 1861.  It was described at the time as a ‘snug little property’ and Olive was proud of its history and her family ties to the community.  Her grandfather was the village blacksmith and signwriter.  He was also a talented painter, as was her father, and both captured images of the local landscape, much of which is now lost to development.

The Retreat came with commoners’ rights, and Olive was an enthusiastic defender of the common. She led the annual beating of the bounds, promoted by the society, on Rogation Sunday. She established the Friends of Chorleywood Common and became its president.  She was also a member of our executive committee from 1995 to 2000.

Olive met her future husband Harold on a sailing holiday, and they shared many interests including nature, wildlife and travel.  Harold died in 2002.

A talented and committed teacher, Olive had the skills to control the most unruly and rebellious children, but she also gave city children insight to the wonders of nature.  She was the first secretary of the Chorleywood and Rickmansworth Workers’ Education Association which was founded in 1952.

She was a strong, independent and knowledgeable person with a deep interest in wildlife and nature, who knew and loved Chorleywood Common intimately.

A committed fighter for public paths in Somerset, Richard Wyld, died in 2016 just before his ninetieth birthday.

Richard was born in Wraysbury, then in Buckinghamshire, in 1926, the son of an architect.  He was educated at Mill Hill School and during the second world war his school was evacuated to St Bees in Cumbria. 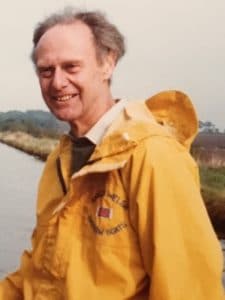 After the war Richard emigrated to Canada where he trained as a chartered accountant and worked as one for ten years, later returning to England to continue his accountancy career.

He took early retirement in 1983 and in 1985 moved to Wedmore in Somerset. In 2014, with arthritis and the associated lack of mobility, he moved into a retirement home in Cheddar in 2014 until his death in July 2016.

Richard played chess and bridge; he was involved in canal restoration, and was a keen walker. He was active in the Somerset branch of the Campaign to Protect Rural England and the Ramblers, and fought anti-public path diversions. I first met him marching purposefully along an obstructed path through a field of head-high crop.

He was a man of strong opinions and firm convictions and took a great interest in politics and finance too.