We are delighted that the Secretary of State for Environment, Food and Rural Affairs has refused to allow an access track to be driven across ancient common land at Newbiggin, near Penrith in Cumbria. The common is known as Public Watering Place and has a number of springs with a series of ancient stone troughs and culverts. 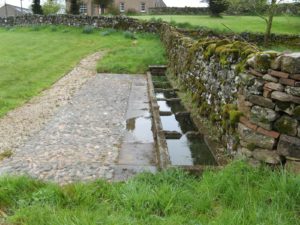 One of the stone troughs on Newbiggin Common

The common was featured in the Friends of the Lake District’s Our Green Space project and was a runner-up for the Open Spaces Society’s 2012 open space award.

Thomas Armstrong (Construction) Ltd wants to build affordable housing adjacent to the common and applied to the environment secretary, under section 38 of the Commons Act 2006, for an access track across the common. The Open Spaces Society, Dacre Parish Council and the Friends of the Lake District objected.

Planning Inspector Richard Holland has, on behalf of the environment secretary, refused the application, saying that ‘there are no factors which outweigh the harm the proposed works will have on the character and appearance of the common,’ and that ‘there is insufficient information to determine that the proposed works will not unacceptably harm archaeological remains and features of historic interest’.

Says Ian Brodie for the Open Spaces Society: ‘While we are acutely aware of the need for local housing in Cumbria, we welcome the environment secretary’s rejection of this potentially intrusive application. It would have resulted in the significant loss of village character, so highly valued by the residents of Newbiggin and the many visitors to the area.’