The Secretary of State for Transport has rejected a proposal to stop up part of Bell Street, Henley-on-Thames for private parking spaces.  The plan would have had an impact on the green space at the end of Bell Street. 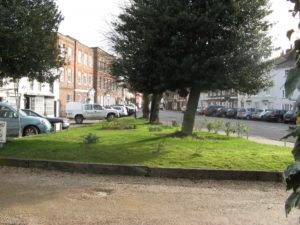 The arguments were heard at a public inquiry last August, and the inspector, Mr J S Nixon, recommended that the order be refused.  Objectors at the inquiry included the Open Spaces Society, the Chiltern Society, Henley Town Council, Rupert House School, Henley Archaeological and Historical Group and local residents.

The inspector was particularly concerned about highway and pedestrian safety and the wider public interest.  He concluded that ‘as for highway and pedestrian safety, it is clear that … the arguments are very strongly in favour of retaining the highway in public ownership and control.’  He considered that the downsides of the street remaining a public highway were very few and generally private or personal.

Says David Parry, who represented the Open Spaces Society at the public inquiry: ‘We are delighted that the rights of residents and the community have been recognised and respected.  We were concerned that pedestrian rights along this length of Bell Street were to be violated by Chesterton’s plan.  This is a pleasant, green corner of Henley and it is excellent that it has been saved for all to enjoy.’