We have appointed Peter Pollak as local correspondent for Market Harborough District in Leicestershire.  Peter will keep a close watch on paths, commons, greens and other open spaces in the area and will intervene when they are threatened.

Peter was an Engineer Surveyor for the insurance business.  During that time, he undertook surveys of local authority owned parks and open spaces which gave him an opportunity to develop an early interest in public rights of way, commons and green spaces.  Through his job he developed a rapport with local land-managers and local councillors at all levels. 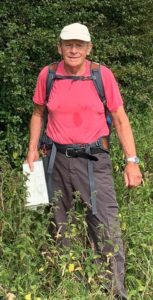 After living in Northamptonshire for many years, Peter, who retired in 2006, moved to Market Harborough.  He remains an active member of the Ramblers’ Northamptonshire Area and served on the Northampton Group’s committee in almost every capacity.  He has long experience of dealing with threats and changes to public paths.

Says Peter: ‘Because Market Harborough was identified by government as being suitable for further expansion, an additional 5,000 properties are to be built here over the next 20 years.  Current planning applications in force by the various developers indicate that numerous public paths are going to be built over without diversions having been agreed in advance—contrary to law and guidance.

‘Since I moved to Harborough I have actively campaigned against these closures and diversions, and have succeeded in persuading some developers to seek an early solution.  Now I shall be able to do this on behalf of the Open Spaces Society, making a stronger voice in defence of paths and open spaces.

‘I strongly believe that access to open countryside, including commons and open spaces, should be enjoyed by all, and for generations to come.  As the Harborough correspondent for the Open Spaces Society I shall carry out the work on behalf of the national organisation.’

Adds Kate Ashbrook, our general secretary: ‘We are delighted to welcome Peter as our Harborough correspondent.  His experience and enthusiasm will be of great value to us in defending the threatened paths and spaces in an area which is undergoing rapid development.  He will demonstrate to developers that they ignore these assets at their peril.’