The five-mile route has been devised by the Friends of the Forest with Nottingham City Council to mark and celebrate the 130 acres of open space won by the people of Nottingham when land was inclosed under the Inclosure Act 1845.  The walk starts at Wilford Bridge and ends at the Inclosure Oak at Forest recreation ground, which was planted in 1865 to celebrate the grant of the 130 acres of open space in 1845.

In 2015 Kate Ashbrook planted a new oak-tree next to the original oak which was by then 150 years old. 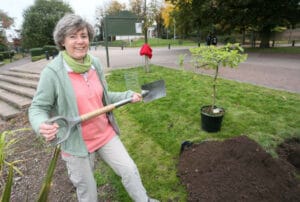 Says Kate: ‘This route is of immense historic importance.  It celebrates the far-sighted aldermen and burgesses, who with the citizens of Nottingham, secured the maximum access allowed under the Inclosure Act.  Between them they have ensure that these glorious spaces and walks can be enjoyed by all. 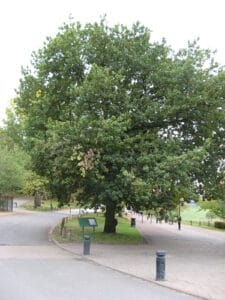 ‘The Open Spaces Society was founded 20 years later, as the Commons Preservation Society, to campaign for open spaces and commons, and we continued the work which was pioneered in Nottingham.

‘But today the battle continues.  Open spaces are threatened with development as never before, yet they have also never been more valued as the pandemic has shown.  The society will continue the fight for our open spaces, following the excellent example set by Nottingham all those years ago.’

Other speakers at the opening include Paddy Tipping, vice-president of the Ramblers, former Police and Crime Commissioner, and former MP for Sherwood; Nottingham councillor Rosemary Healy; and Tom Huggon, Nottingham’s champion for open spaces.  The event has been organised by June Perry of the Friends of the Forest.

Meet at the south end of Queen’s Walk, Wilford Bridge, at 1pm on Sunday 26 September for the opening and speeches.

Following the event, we filmed Kate sharing her fantastic experience of the day – watch the short video here.

There is a film of the entire event, including Kate’s address as she opened the new trail here.