An ambitious community campaign to preserve a threatened 30-acre beauty spot in Farnham has been named winner of the first-ever Open Space Award.

The amazing success of The Bishop’s Meadow Trust impressed judges from Open Spaces Society and earned it the top spot, despite strong competition nationwide. 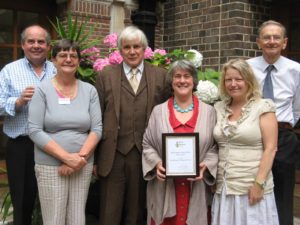 Jo Aylwin, chairman of the trust, attended the society’s AGM on Tuesday, 10th July 2012 where she was presented with a certificate to mark the victory. She said protecting the stunning meadow had been a daunting task but absolutely worthwhile.

“When we started the campaign we didn’t realise how much it would resonate with the community but it seems there is an unspoken agreement that people need open space around them – it is hugely important.”

The movement began when it emerged Bishop’s Meadow, described as a “green lung for Farnham”, was at risk of being sold to developers.

Philanthropist Sir Ray Tindle, founder and head of Tindle Newspaper Group, lives in Farnham and has had a long term interest in the meadows. When they were put up for sale he approached the family selling with a bid for part of the land. However, when he heard of the intention to raise the money to purchase the land for the community, he volunteered to buy it all immediately and give the Trust time to raise £210,000 to purchase the land back from him. He will retain about 2.5 hectares, as he always wanted.

Sir Ray has personally contributed substantially towards the Trust’s funds and has generously never charged interest. Without his involvement this project could never have got off the ground.

Residents were galvanised and set about raising the funds to save the land. They founded The Bishop’s Meadow Trust and are well on the way to reaching their goal, ensuring the meadow remains a community asset for generations to come.

Trust chairman Jo, aged 56, has lived in Farnham all her life. She said: “We really are absolutely thrilled with how the campaign has developed. The response has been fantastic and it feels like it’s all coming together now.

“We are very confident we will able to raise the final amount of money we need to reach our £200,000 target.”

She said the meadow was flourishing with more plants and new species of wildlife, including Peregrine Falcons.

Jo added: “We have learned so much about the meadow during this campaign. It’s so much more than just a field; it has a spirit which I think inspires people and that in itself is worth fighting for.”

The Open Space Award was launched this year to celebrate the efforts of those who protect, increase, enhance and champion common land, town and village greens, open spaces and public rights of way. It is hoped it will become an annual event.

Tim Crowther, the society’s chairman and a member of the judging panel, said: “The success of The Bishop’s Meadow Trust shows what can be achieved at grass roots level when local people work together with community spirit and a common purpose.

“We congratulate Jo and the people of Farnham who now have an outstanding area of accessible public open space close to the town centre for present and future generations to enjoy and cherish. Bishop’s Meadow is a deserving winner of our first Open Space Award.”

Find out more about it here.

This was a major project which involved five different sites across the Lake District. It involved training and supporting the five communities to develop their green spaces and make better use of them. Find out more here.

The singular determination of a Yorkshire woman to inspire her local community and return a memorial garden to its former glory has also been celebrated in the inaugural Open Space Award.

Judges have awarded Jade Smith a commendation for her extraordinary contribution to Royd Regeneration, a community-driven project in Mytholmroyd, West Yorkshire.

Royd Regeneration was one of four projects shortlisted for the Open Space Award 2012. While it was pipped to the post by The Bishop’s Meadow Trust, in Surrey, judges were keen to recognise Jade’s individual contribution.

Jade’s commendation was announced on Tuesday, 10th July 2012 at the society’s AGM.

Jade, aged 51, said: “It’s wonderful, I feel very proud and humbled. In these days of money making and celebrity pizzazz, service to a community and old fashioned community spirit is not lauded in the way it once was.

“It is an honour for me to serve the community in Mytholmroyd, a place where people quietly get on with life and still enjoy traditional pastimes.”

Jade, who suffers with the debilitating condition Fibromyalgia, was spurred into action in August 2008, after hearing people complain about the state of the memorial garden. She set about raising £125,000 and involved almost every branch of the community to give the space a new lease of life.

She made weekly visits to the local youth club to involve youngsters in the project and they helped design the refurbished garden and installed their own memorial bench in honour of a young friend who had passed away. Jade also helped establish a choir involving all three local schools during the life of the regeneration project.

The inspiring individual spent hours talking to people with disabilities to improve their access to the gardens and, with the help of fellow residents, produced a commemorative book featuring photographs of the servicemen and women the garden was created to remember.

Jade said: “I couldn’t have done it without the young people – they engaged with me as much as I with them. To this day there is not so much as a mark in that garden and that is both a dedication to my work and a testament to them, I’m so proud of them.”

The Open Space Award was launched this year to celebrate the efforts of those who protect, increase, enhance and champion common land, town and village greens, open spaces and public rights of way.

Tim Crowther, the society’s chairman and a member of the judging panel, said: “Jade is an inspiration to us all. What she achieved in Mytholmroyd is exactly the kind of campaign the OSS wishes to promote.

“Almost single-handedly Jade managed to involve everyone in the community, raise a significant amount of money and get people working together on a really heart-warming project. Vitally, she has restored and revived this precious open space for all residents and visitors to enjoy,” he added.