A London council has bowed to pressure over its controversial policy of allowing major events to be held on its parks and open spaces.

Lambeth Borough Council, which has come under fierce criticism for making money out of allowing damaging commercial events, has at last agreed that in future it will seek permission from the Secretary of State for Environment, Food and Rural Affairs before structures can be erected on Clapham Common.  This is its key venue for holding music festivals and other outside events.

Vast tents, domes, stages and other structures have been allowed by the council, causing huge damage to the common.  Until a challenge by local amenity groups in conjunction with the Open Spaces Society, the council had categorically insisted it had the powers to permit these ‘temporary’ structures. 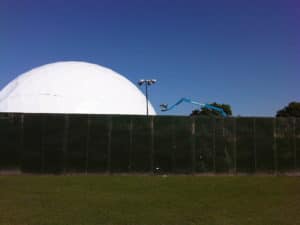 The Open Spaces Society has repeatedly told the council that the relevant statutes are clear that all structures require the council to obtain permission from the Secretary of State for works on common land.

Now, in response to a formal legal opinion that restrictions apply to all structures, whether temporary or permanent, the council has changed its stance.  It has written that the legislation is ‘ambiguous and uncertain’ and that it will in future seek permission.  This will entail formal public consultation and the chance for the decision to be taken out of the hands of the council.  The concession applies only, however, to Clapham Common and not to other parks and open spaces in the borough.

In the same letter the council has revealed that it will cost a staggering £200,000 to restore the heavily-used, so-called ‘events site’ on Clapham Common.  Frequent exploitation of this supposedly-grassed area for music festivals and other events has repeatedly reduced parts of the common to a muddy, rutted field and bare earth with a few weeds.

The public has been excluded from the ‘events area’ for long periods, covering not just the events themselves but the set-up and derigging periods, and then for months while attempts have been made to restore the site—only for this work to have to be repeated the next time the area is used and damage occurs. 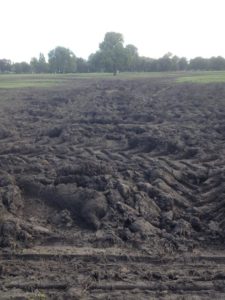 The council has now agreed that one of the most damaging events, Winterville, which has occupied Clapham Common ‘events site’ for a couple of months in the run-up to Christmas and the New Year, will be moved from there to hard surfaced areas of the common.

The Open Spaces Society’s general secretary, Kate Ashbrook, commented: ‘We welcome these concessions by Lambeth Council and congratulate the Friends of Clapham Common and the Clapham Society for firmly challenging the council on its failure to protect the common.

We are concerned however, that its change of heart over putting up structures applies only to Clapham Common, and that the events area will still be damaged and enclosed for events.  While Clapham Common has been the worst affected, there have been problems at other open spaces in Lambeth, most notably Brockwell Park and Streatham Common where significant damage has occurred in the past.

‘We shall be challenging the council to apply the same protections to other open spaces in the borough which have the same legal status.’

The society’s local representative for Lambeth and Wandsworth, Jeremy Clyne, added: ‘Local people have rightly been furious over the way that Clapham Common has been abused over the years.  The society has repeatedly highlighted this degradation of the fabric of the common and the exclusion of the public from public open space.

‘Now we see there is a high price to be paid for this exploitation.’