Kate Ashbrook writes: We are sad to report the untimely death of John Underhill-Day at the age of 74. He was an excellent all-round naturalist with expertise in common land, and a good friend to the society.

John was born in St Albans, Hertfordshire, and educated at Lancing College in West Sussex, which he hated. He left at 16 and trained to be a surveyor, but after five years of office routine he escaped to become warden of Coombes Valley, a Royal Society for the Protection of Birds (RSPB) reserve in Staffordshire. 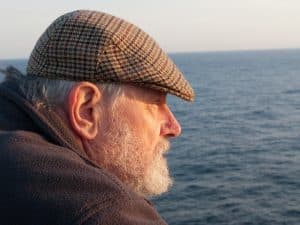 From 1971 to 1988 John worked at The Lodge (RSPB’s head office) as deputy chief reserves officer and head land agent. He had a major role in the huge expansion of RSPB reserves, and he negotiated the purchase of Minsmere in Suffolk and Leighton Moss in Lancashire, among many others.

He much preferred to work in the field and in 1988 he became warden of Haweswater reserve in Cumbria, the only site where golden eagles were breeding south of the border. While there he completed his PhD on the breeding status of marsh and Montagu’s harriers in Britain. In 1996 he became the senior site manager at the Arne reserve in Dorset. 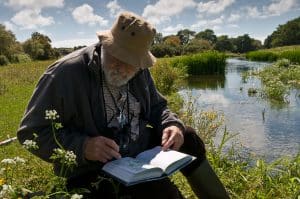 John by the River Piddle near Wareham. Photo: Andrew Dodd

The RSPB found that it was facing threats of development on lowland heaths, in which John was expert, and it called upon him to serve as a witness at public inquiries; the lawyers were much impressed by his ‘magisterial’ authority.

Those inquiries included the Thames Basin heaths; Talbot Heath in Dorset and Lydd airport in Kent. In 2010 he received a 40-year service award from RSPB.

In 2005 he founded Footprint Ecology with his RSPB colleague Durwyn Liley. This consultancy, based at Wareham in Dorset, specialised in conservation management and common land—and that is how our paths crossed.

John was generous in involving the society in his work; he frequently advised landowners and managers on the best outcomes for their commons and always urged them to consult the society about access.

Many are the heathland commons I visited with John to consider options for management—and I would ask him to look out for birds for me. I heard my first nightingale in John’s company on Ebernoe Common in West Sussex in May 2010, a memorable moment.

Together we ran training days for commons managers in various parts of the country; John was always pleased to find a role for the society. We miss his expertise and his friendship.

This obituary appeared in Open Space, autumn 2018.  We have corrected the second paragraph as Coombes Valley reserve is in Staffordshire (not Suffolk as stated in Open Space).