Our world of paths and commons would be very different but for the work of Jerry Pearlman who has died aged 84 on 9 March 2018, writes our general secretary.

Jerry was honorary solicitor for the Ramblers for more than 30 years; he took on countless path battles and campaigned for freedom to roam on open country.

Born in 1933 in Redcar in the then North Riding of Yorkshire, Jerry spent his childhood in Keighley and Bishop Auckland where he went walking in the countryside with his father, Sam.  At that time he decided he wanted to be a lawyer; he took a Bachelor of Laws degree from London University and for 60 years practised as a solicitor.  His great joy was using his legal expertise to save paths, commons and national parks.

Jerry and Bernice met on a ramble to Ingleton which he had organised for the Jewish Society in 1957, and they were married in 1961.  They had two daughters, Kate and Debbie, and three grandchildren. 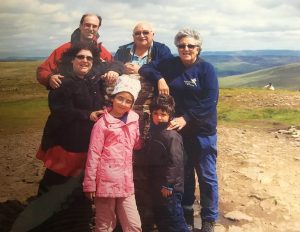 Jerry with his family on Pen-y-Ghent

Jerry was generous with his time, both to the Ramblers and the society.  He was involved in hundreds of cases, in court and at public inquiries, which confirmed our rights and clarified the law on paths.

Probably his greatest victory was in the House of Lords, the landmark Godmanchester and Drain case (2007), which set an important precedent for those claiming public paths.  And the case involving the most paths must have been the Ombersley ‘rationalisation’ scheme in the then Hereford and Worcester which threatened to divert more than one hundred paths, defeated by Jerry in 1994.

Leader
Jerry was a leader in the campaign for the right to roam and drafted the bill which later formed the basis for the Countryside and Rights of Way Act 2000; he attended the sessions in parliament as the bill ground its way through, briefing MPs and Peers with clever arguments.  He also exposed the iniquity of inheritance-tax exemption whereby landowners were let off paying tax if they opened their land to the public.  In his 1992 booklet ‘Give us some quo for our quid!’ he showed that the land thus ‘opened’ to the public was largely kept secret by the owners, was tiny in amount and only temporarily available.

He was active in defending commons too.  In 1988 he helped to save the 2,000-acre Grassington Moor in the Yorkshire Dales National Park from deregistration at a hearing where he was up against leading common-land QC Sheila Cameron.  Jerry won and solicitor Richard Harland, who wrote about the case in Open Space (autumn 1988) concluded ‘Jerry Pearlman deserves warm congratulations; his marshalling of tomes of evidence and brilliant advocacy won the day over a top common-land QC’.  Jerry also helped the society to clarify the responsibilities of the National Trust on its commons, in a friendly action in the high court (1997). 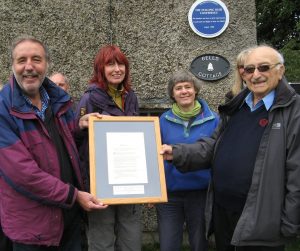 Paddy Tipping, Janet Street-Porter, Kate Ashbrook and Jerry, at Jerry’s cottage in Stalling Busk, October 2017. They had just performed the ceremony of unveiling a plaque on the cottage to commemorate a Ramblers’ meeting there in 1996 to discuss right-to-roam legislation.

He helped to stop a motorway across Wharfedale; he fought quarrying applications; he saved Grassington Moor common in the Yorkshire Dales from deregistration—and much more.

Lecturer
In semi-retirement Jerry took up a new career as a cruise-ship lecturer.  He offered a choice of five talks.  Number one was advertised as ‘Some Environmental Legal Nutcases: This is my “lead” lecture telling the story of three unusual individuals who used the law and history to win environmental victories.  It is quite funny and always well received.’

Jerry was a great figure in our movement; he will be remembered with affection and admiration, as an inspiration to all who campaign for our rights and freedoms to the land.